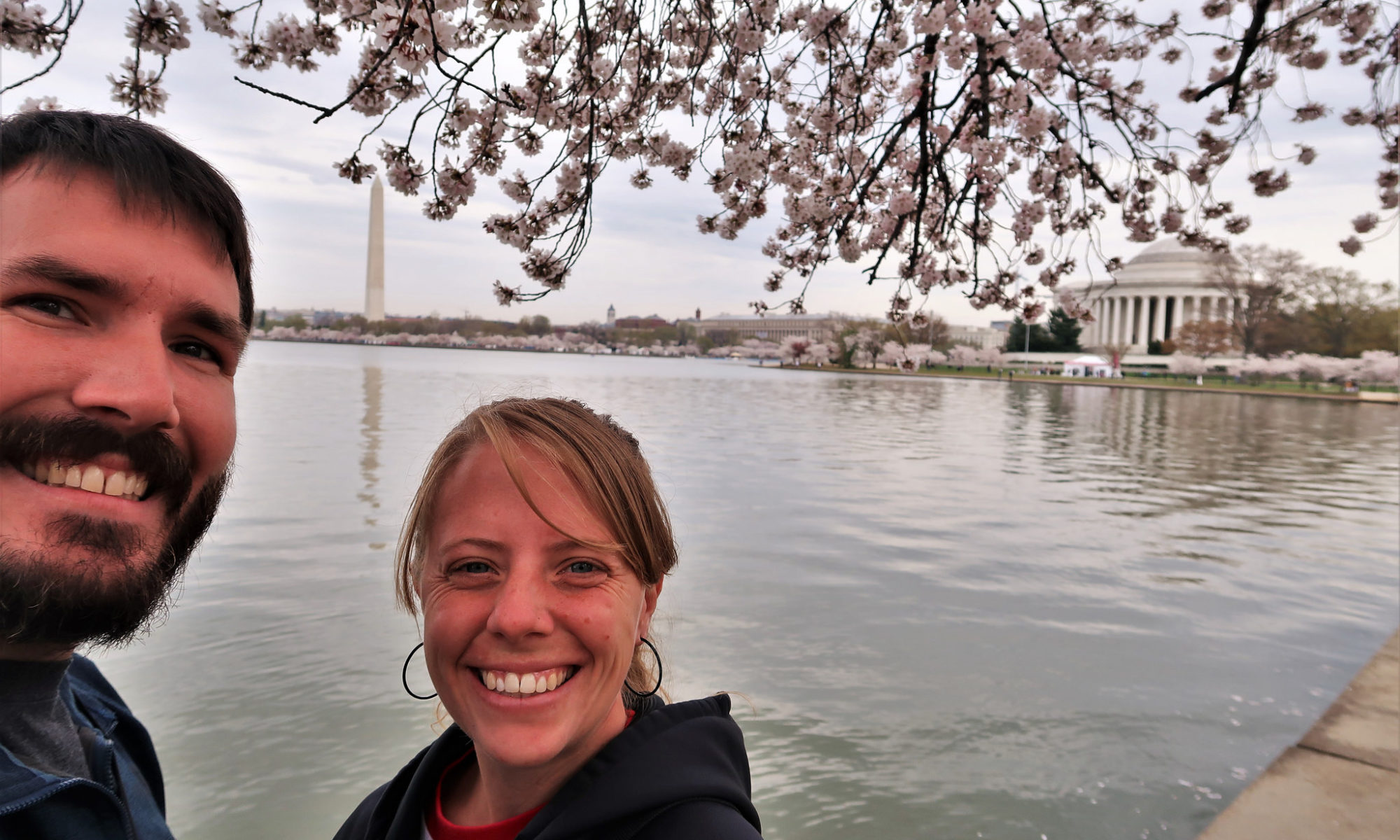 We’ve both previously been to DC and hope to plan a longer vacation here in the future to get a more in depth look at what DC has to offer. Our plan today is to walk and see some of the famous monuments in the National Mall.

Today is one of the first nice days in a while, making it a perfect day to walk around DC.

It also just happens to be the end of the Cherry Blossom Festival! 🌸

This provides us with picture perfect trees surrounding the Jefferson Monument.

After visiting the home of Thomas Jefferson at Monticello, we now get to visit his dedicated monument in Washington DC.

We’re impressed to learn this monument was constructed of white Imperial Danby marble from Vermont.

The steps and foundation are made with both granite and marble.

The pillars are gigantic!

It wasn’t until 1943 that they completed the Jefferson Monument. Which just happened to be Thomas Jefferson’s 200th birthday!

The statue, created by Rudulph Evans, depicts Thomas Jefferson holding the Declaration of Independence, which he authored, in his left hand.

Surrounding Jefferson are quotations from his writings.
One being a portion of the Declaration of Independence.
The others include a statement from his letter to Samuel Kercheval, quotes taken from his “1786 Notes of Virginia” and “Summary Views”, and a quote from the “Act of Religious Freedom”

After admiring the statue, we decide to head out and see some of the other monuments.

Walking around the National Mall’s Tidal Basin, we get to admire more of the cherry blossoms in full bloom.

We can’t help but stop and appreciate the lovely weather and views that lay before us.

Tommy is able to capture postcard worthy photos of the monuments around the basin.

We’re so glad we came at just the right time to see these trees in full bloom.

During the festival, they offer shows and acts throughout the day. While we sit and eat our hotdog, we get to enjoy this puppeteer.

We’re not too impressed. You can literally see his mouth moving while the puppet is supposed to be talking.

After being let down by the puppeteer, we carried on to our next stop.

Unfortunately, the Washington Monument is under construction, so we cannot go inside.

Since there’s not much to see from the outside, we snag our photo then head toward our nation’s Capital Building.

Along the way, we come across this curious looking building.

Upon further investigation, we find it’s the Smithsonian Institute, which is the world’s largest museum, education, and research complex.

Right dab in the middle of the park along our way we see a minivan enclosed in glass.

Was this a monument to a commemorate someone who loved minivans?

Nope! This was the first minivan built in 1983 by Chrysler.
Man, have they progressed over the years!

A walk around the park is pretty refreshing! In the distance we can see our next stop!

It takes a while to walk down this rock ridden path, but we finally make it.

There are lovely ponds and fountains at the back of the Capitol building.

It’s so beautiful, you might even think it’s the front.

As we get closer, we can see some people on the balcony taking photos.

We try to zoom the camera in to see if we can make out faces, but have no success.

Even on the road, we still  get interrupted by telemarketers….
How did they get our number?  📞

Looking back, we can see the business of DC with the Washington Monument standing proudly in the center of it all.

Just as we’re about to head back toward the Washington Monument, a security guard informs us that to visit inside of the Capitol building is free.

Neither of us have been in, so we take him up on the offer and make our way around the building.

It’s an estimated 8-10 minute walk from the back to the front of the Capitol building. ⏱

We finally make it to the front and have to find out where to enter.

Looking ahead a little further we find the entrance to the visitors center down a set of stairs.

We make our way past the security, then into the building.

Our parking meter is counting down quite fast, so we don’t have time to take a tour. We opt to visit the Library of Congress instead.

The Library of Congress is the official research library for Congress as well as serving as the national library for the United States.

It’s also the largest library in the WORLD!

We find it interesting to learn that it holds both the largest and smallest book in the world.

Back at Monticello we learned that after the first collection of books was burned by invading British troops, Jefferson sold his personal library collection to restart what would become the new Library of Congress collection.

Here we get a glimpse of this antique office, which served as the Librarians office from 1897-1980.

While we are here, there are people in real time conducting research for something or another.

We go upstairs so we can stand on a balcony covered in glass….

… to watch them research!!!

If you haven’t watched someone studying, you should try it out. It’s pretty exhilarating!  🤪

It’s quite beautiful in the study area. We take one last moment to appreciate all it’s beauty, then head out.

Outside we take a a moment to look at the ceilings surrounding the building.

It is amazing how decorated a ceiling can be.

We take one last photo of this lovely lady heading down the stairs of the viewing area, then head out back to the streets.

Outside, we snag a photo of the front of the Library of Congress…

Our meter is counting down fast, so we have to pick up our pace.

You can’t go to Washington DC without visiting the White House.

We decide to visit it from a distance this trip (we’re kinda in a hurry to beat our parking meter at this point!).

On the way from the White House to the Lincoln Memorial is the World War II Memorial.

This memorial honors the 16 million members of the Armed Forces in the United States of America! Each state is represented by a granite column.

There are two victory pavilions on each side that chronicle the efforts the Americans took to win the war. The Atlantic Pavillion and the Pacific Pavilion.

We decide to admire the memorial from the outside, then continue on walking along the path of the Lincoln Reflecting Pool.

It’s no surprise to us that this is the largest pool of its kind.

Last year the pool was closed due to an infestation of a parasitical outbreak that was killing the local ducks and ducklings.

It has since been restored to its reflecting beauty!

There is currently a tribute to those who endured the holocaust along the path. It displays a photo and the dates and locations they were in concentration camps.

Our final stop for the day is the Lincoln Memorial.

This is the third time an airplane has photobombed our pictures!! ✈

After enjoying the views from the outside…

… we head on in to admire the 19 ft statue of Abraham Lincoln.

Next time you visit the Lincoln Monument, take a closer look at Lincoln’s hands. Some believe he is actually signing an “A” and an “L”.

There is no proof this was intentional, but historian Gerald Prokopowics believes it to be true.

One of the sculptors, Daniel French, knew that Lincoln was a proponent of further studying sign language. Lincoln authorized and signed the charter for Gallaudet University, a school for deaf.
Mr. French sculpted for the University as well.

Take a look and decide for yourself!

We take our time taking a few photos and enjoying the monument dedicated to Abe and the surrounding views….

It’s hard not to get into character visiting all these historic locations.

Our time in Washington was pretty short, but we’re pleased with how much we were able to accomplish.