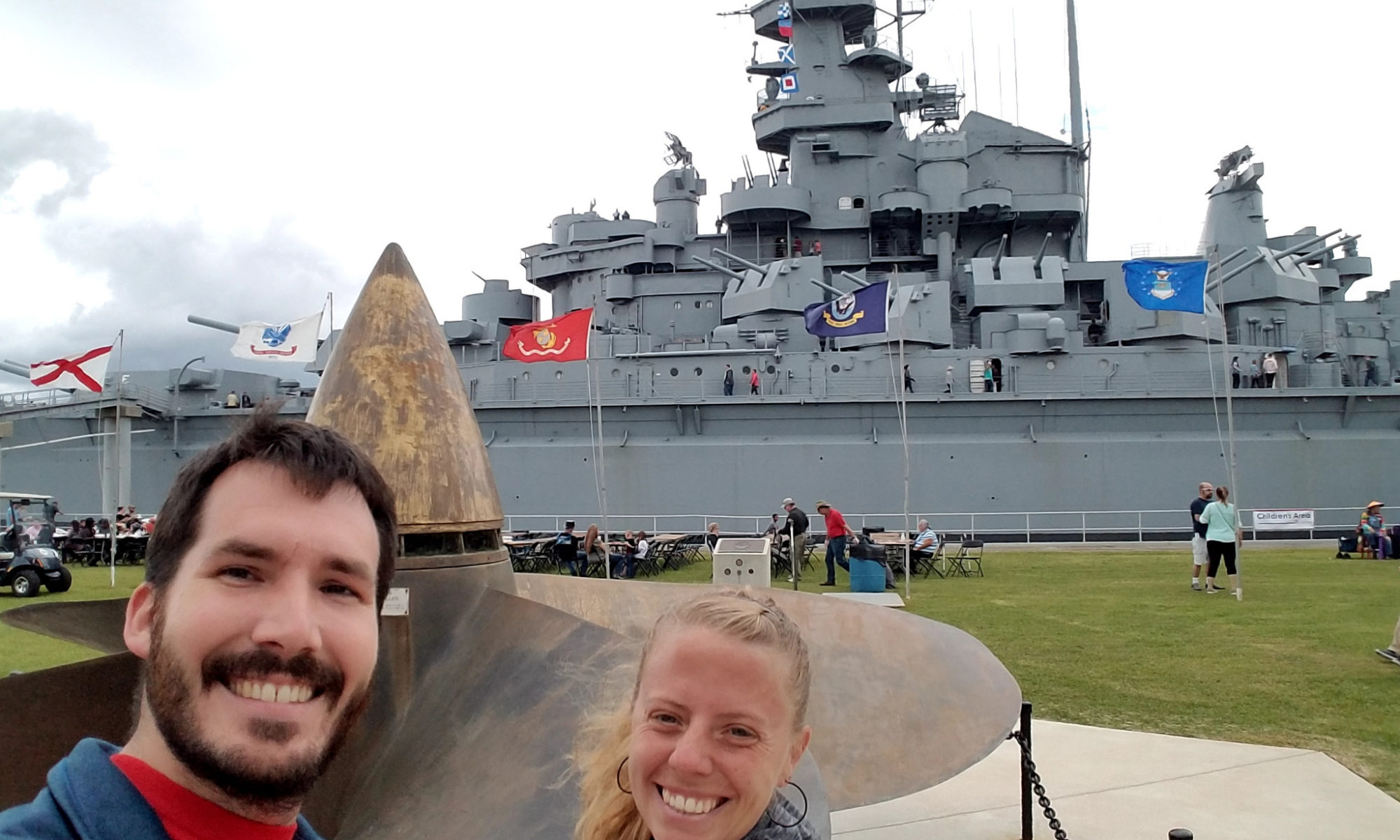 September 5th, 1945, The USS Alabama leads the entire American Fleet into Tokyo Bay upon the signing of the surrender documents, thus ending WWII.

It’s time for us to upmoor our anchor and take a journey back in time aboard the USS Alabama. ⚓

Had it not been for the Alabamians dream of this anchored attraction, the ship would have been scrapped for metal along with the rest of the BB-60 North Carolina Class fleet.

Wait… why didn’t our outfits change like they always do in movies when they go back in time???

It’s a chilly, windy day, but we’re excited for this opportunity to walk the ship heroes sailed.

It is amazing to see the amount of firearms this thing has!

Grabbing the large gun, we take aim at what lies beyond the ship.

Tommy will get him!

What’s life like for the 2,500 crew on such an important battle ship?

This 680 ft ship played a very important role during WW2.

The USS Alabama served during the raids on the Marianas in 1944. It was here that the Alabama shot down one of it’s first enemy planes.

During the battle of the Philippine Sea, the USS Alabama, along with her battle group downed nine enemy planes, sustaining hardly any damage.

Having all these guns really pays off!!

In July of 1945, the USS Alabama left the defense of aircraft carriers to bombard the Honshu Island, demolishing a large stock of enemy ammunition.

After victory and upon returning home, the USS Alabama was decommissioned on January 9th, 1947.

We are very proud of all her work and efforts during the war!

Tommy finds the entry hatch into the main gun turret!

He even finds a way to get himself trapped!

It’s remarkable to learn the amount of time sailors would spend aboard these ships.

We can’t imagine being stuck here in the living conditions these men had to endure for years at a time.

Here we have their ice-cream parlor. 🍨

It’s nice to know the guys had some kind of luxury accomodations! 🍡

After climbing flight after flight of crowded stairs, we reach the highest point the museum will let us.

It is here Kali assumes the reins as Captain and takes us onward!

She relinquishes the reins so we can continue to explore.

Just past the exterior door, we enjoy the views the ship has to offer.

After our delightful journey through the past on the USS Alabama, it’s time to step into a submarine!

The main reason for us visiting this park is the USS Alabama, but since we’re here, we can’t resist visiting the submarine!

We are excited to visit the oldest American submarine on public display. Upon entering, we learn this submarine operated with a crew of 72 members.

That is a tight space for so many people!

This submarine played an important role in several battles during WW2. She sank numerous enemy cargo and transporting ships.

Is knocking on torpedos bad?

Not wanting to be sunk, we gaze into our observation periscope looking for enemy ships and aircraft.

These door are quite squishy!!!

Standing on the deck of this submarine sure makes us proud to be an American!

On the way out we stop by the indoor exhibits filled with F-15’s and numerous other war aircraft.

Tommy’s keen eyes spot this stealthy aircraft as we walk back to the van.

This A-12 Black Bird is one of the stars of the museum, boasting a 65 ft wingspan and a length of 125 ft. The CIA used this aircraft in 1965 for secret spy missions.

Stepping back in the present, it’s time for us to continue our road trip and make our way toward Florida!