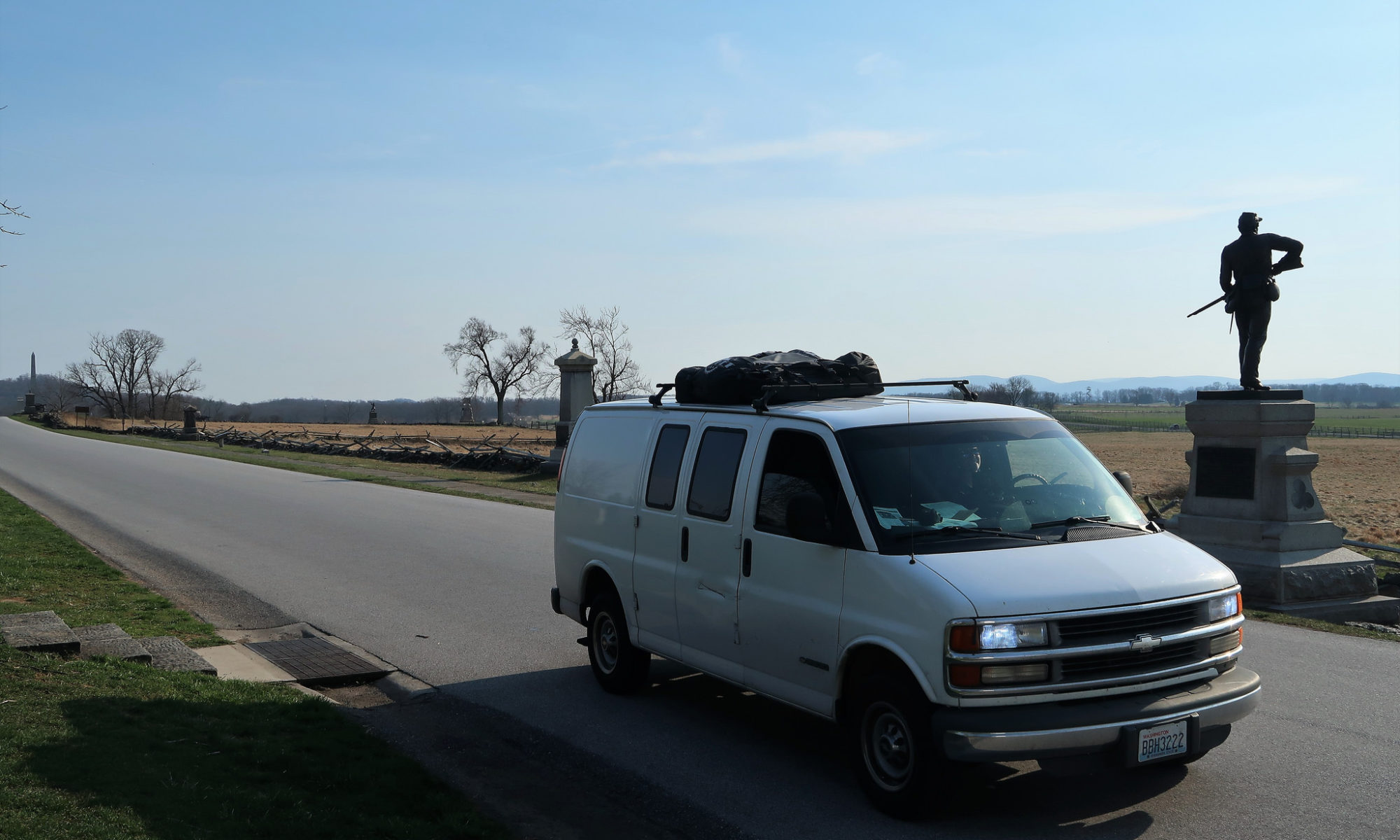 The infamous battlefield at Gettysburg is arguably the turning point in the Civil War.

While not the largest battle in the Civil War (Fredericksburg with 25,000 more troops), Gettysburg is by far the costliest. It’s hard to imagine that in a span of only 3 days over 51,000 Union and Confederate soldiers are dead, maimed, or missing.

There are so many sites to view in Pennsylvania. Today we’re stopping at one of the most well known historic sites, Gettysburg.

The trip starts with a visit to the Visitor Center! (didn’t see that one coming).

The information desk gives us some great suggestions on what to do, and better yet, free museum admittance for military!

We kick off our museum experience with a short film

Which when finished leads us into a large cyclorama!

What this is, is a 360 degree painting by French artist Paul Philippoteaux.

The museum contains many artifacts from the battle..

These beams all fell victim to a single cannonball

…quite a powerful cannon!

On display are papers that hold an original signature of Abraham Lincoln!

Out To The Battlefields

There are several options to explore the fields.

Walk/Bike… It’s a big battlefield.
Take a bus tour.
Hire a guy to ride around with you in your car as you drive (we don’t technically have a third seat)
Drive it yourself and play the audio CD.

We’re too cheap for the audio CD, so we drive it ourselves and scour the internet for free tour dialog (there’s not a lot).

Regardless, we enjoy our drive!

The battlefield is quite large… and is littered with MANY monuments.

This monument is the approximate location of the first shots fired to start the battle.

Large towers offer us pretty grand views of the area.

I bet generals commanding their troops several hundred years ago would have loved these things!

Like many major battlefields, it’s chilling to recall what was happening here. So many lost souls.

By vehicle is a great way to explore…

We can move around quickly, but also have the option to park and hop out at almost any time.

After our drive, we head over to the National Burial Grounds and the site of Lincoln’s Gettysburg Address.

Buried here is also buried Mary Virginia Wade, Ginnie, who was the only direct civilian casualty of the battle.

After we’re all done touring the fields it’s time to wrap up our day with some dinner.

Tonight we’re exploring Tommy’s Pizza (Yep, you got that right!).