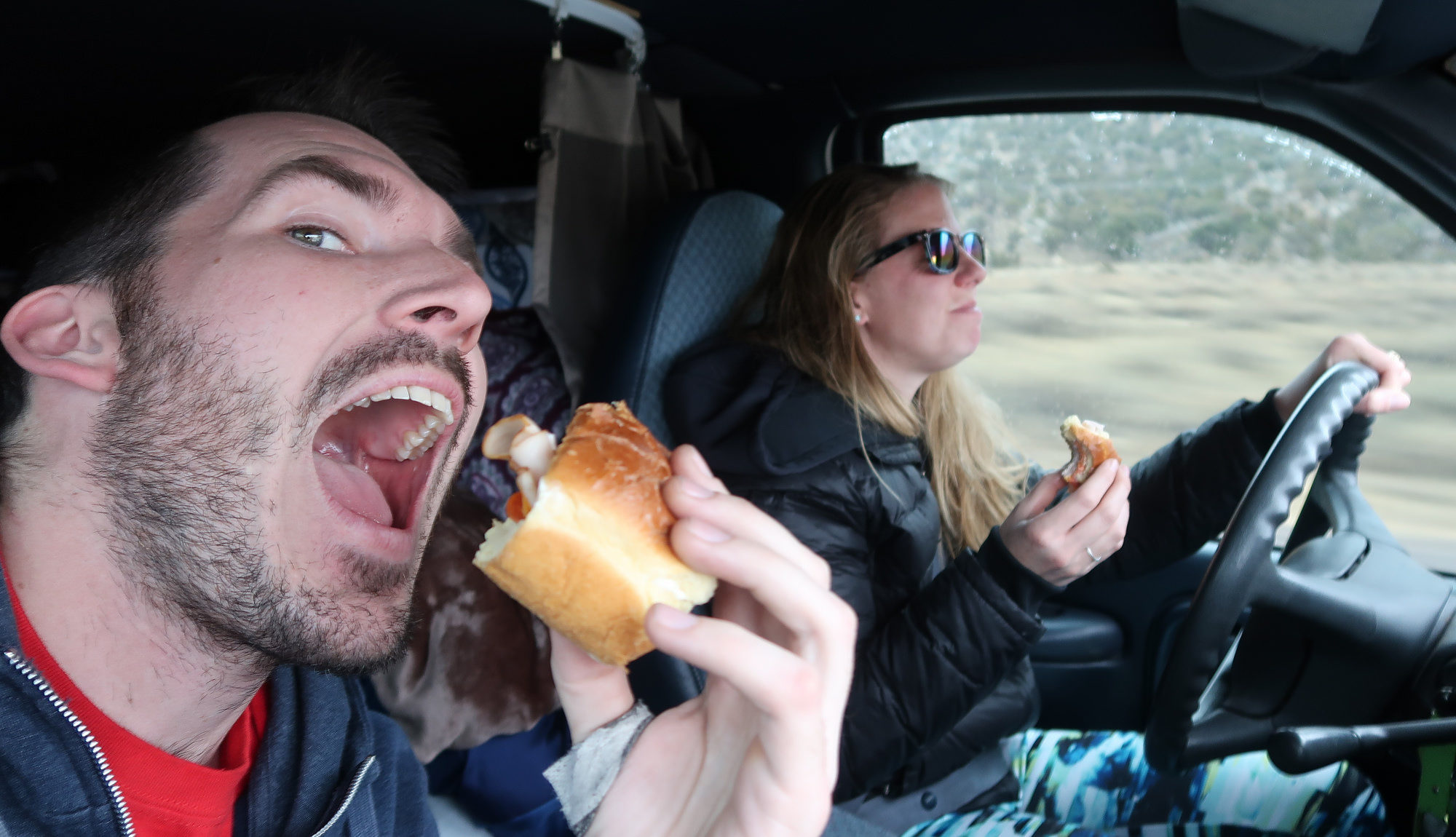 Arizona has been great, but it’s time to hit the road and head to New Mexico! We imagine this drive to be pretty desolate and flat, so hopefully we can hit that cruise control and cover some serious miles!

We’re on the road and trying to minimize stops, so for lunch……

As we imagined, the roads are pretty flat with not a car in sight. The cloud cover, our only company!

Along the way we are hoping to stop by the largest airplane boneyard in the WORLD!!! ✈✈✈✈✈✈✈✈

Due to the low humidity, Davis-Monthan Air Force Base makes the ideal location to store these mass amounts of airplanes.

We are excited to see over 4,000 military aircraft stored on this base! Airplanes of all sizes can be seen from the road as we ride through the gate.

It is not until we reach the boneyard gate inside the walls of the base that we find we’re are not able to drive through it. 😞

We have to book a guided tour far enough in advance to have a security clearance completed.
Then we don’t even drive through the boneyard, we get bussed through the aircraft.

Even if we had the security clearance completed, the next tour isn’t for several hours… I guess we’ll have to settle for seeing the airplanes from the road. ☹

It’s off base and back on the road to New Mexico for us!

Until SUDDENLY, as we’re driving along!…

Curiosity sure gets the best of us, so we take the exit and make a stop.

Entering the building, we have no idea what is in store for us……

We’ve seen movies… and out in this desert, it could be anything!

After walking through a souvenir store, laden with construction, tucked in the back of the store is this mummy of a mother and her child.

It is believed that the mummies are a fake created by a man named Homer Tate…. but are they really!?!?

It seems we lucked out with the construction.
Normally it costs $1 to see this and walk through several other exhibits, but for us it’s just this mummy!

…. and a large number of souvenirs.

The Beat Goes On!

With our legs stretched and our mind at ease, we hit the road.

Along the way, we just happen to drive past this LARGE pistachio.

We snag a picture as we drive by this 30ft nut positioned in front of McGinn’s Pistachio Tree Ranch.
It just so happens to be the world’s LARGEST pistachio nut!

As we continue to drive, we’re in and out of rain.

The hope is to get to White Sands before nightfall… and if the weather is good, camp the night in the park.

However, the sky is darkening and we fear it could mean more rain.

As we fill up for gas, we feel our tummies rumble.

Just across from the gas station is what looks to be a fine place to eat. Rancher’s Grill!

We order a burger and a sausage, which both turn out to be delicious! 🍔

As good as our on-the-road sandwiches are, it’s nice to get a break from them and eat something else. 😉

Continuing our drive, we’re excited to be close to our destination…

… but we’re not excited about the fact that it’s STILL raining!

The ranger at the visitor’s center mentioned that the white sands would probably not be so white due to the wet conditions.

And camping… would not be fun!

We decide it is probably best to come back the next day.

Time to find a Walmart close by and van camp for the night!