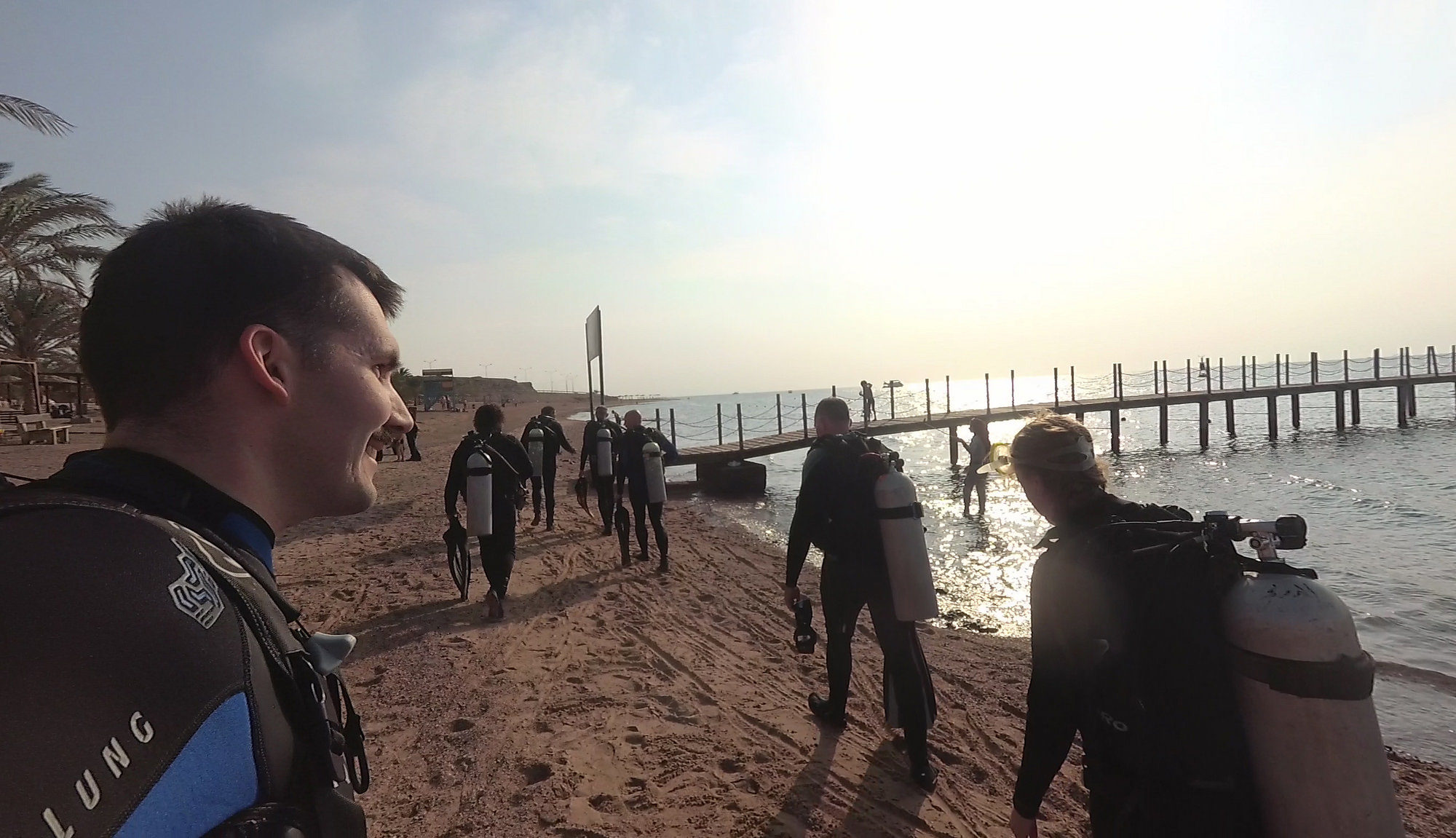 We’re back!
And we have a little more time to spend in Aqaba… but not much! and we’re going to do some more Scuba Diving.
We’re aiming for two dives, and we’ll try to explore the city itself a little bit.

If you haven’t already, check out our first visit to Aqaba !

So always request one!… if you know… you find yourself traveling to Jordan… and staying at this same hotel…

They offer some shore dives, which will get us into the water a little quicker than the boat we used last time.

This place has great staff and we highly, highly recommend these guys!

The dive guides take some time to explain both dive sites and the routes we’ll take.

Our first dive is Cedar Pride, which is a sunken cargo freighter spanning a couple reefs of coral.
The ship was a Lebanese freighter intentionally sunk November 16th, 1985 after it had sustained substantial damage in a fire.
It’s since become Jordan’s most popular dive site.

A lot of these dive sites are located right near each other, so we’re actually on the shore line near the tank, if you recall from Aqaba & The Red Sea part 1.

We take a little time to get all of our gear situated and fitted.

Then we’re off to sea!

Before long the ship’s bow fades into view…

The ship lies on her port side about 130m from the shoreline.

and is at a max depth of 25 meters

Looking up, we see lots of fish circling and feeding.

The ship is about 80m in length from bow to stern.

Located nearby is a site called Japanese Gardens.
To access this site we return to shore, swap out our tanks, and re-enter the water slightly further down the coastline.

The dive guide points out a small sea creature we’re able to gently play with… yeah okay, I suck at marine biology.

The site gets it’s name, Japanese Gardens, from the many large coral heads which some say resemble ancient Japanese pagodas

We don’t really see it ourselves… but then again I don’t think we were really looking.

We were just having fun…

We’ve been shooting video!! So… here’s a little Kali compilation we put together…
It’s title you ask? Well…

We head back to shore, return our gear and head to the hotel to end our day!

It’s the next morning, and with a little extra time venture off into the city!
We explore and old church:

We continue to wander the streets:

…some spots are a little more run down than others…

…this of course has nothing to do with our next stop, China Town!

It’s actually quite a bit larger than it appears from the outside, and a huge Labyrinth of product packed corridors…

but what better way to end your day than with some fine Jordanian cuisine??

Yeah… we see the look that guy’s giving us.

Don’t forget to check out our Aqaba photo gallery!!
Until next time!!!