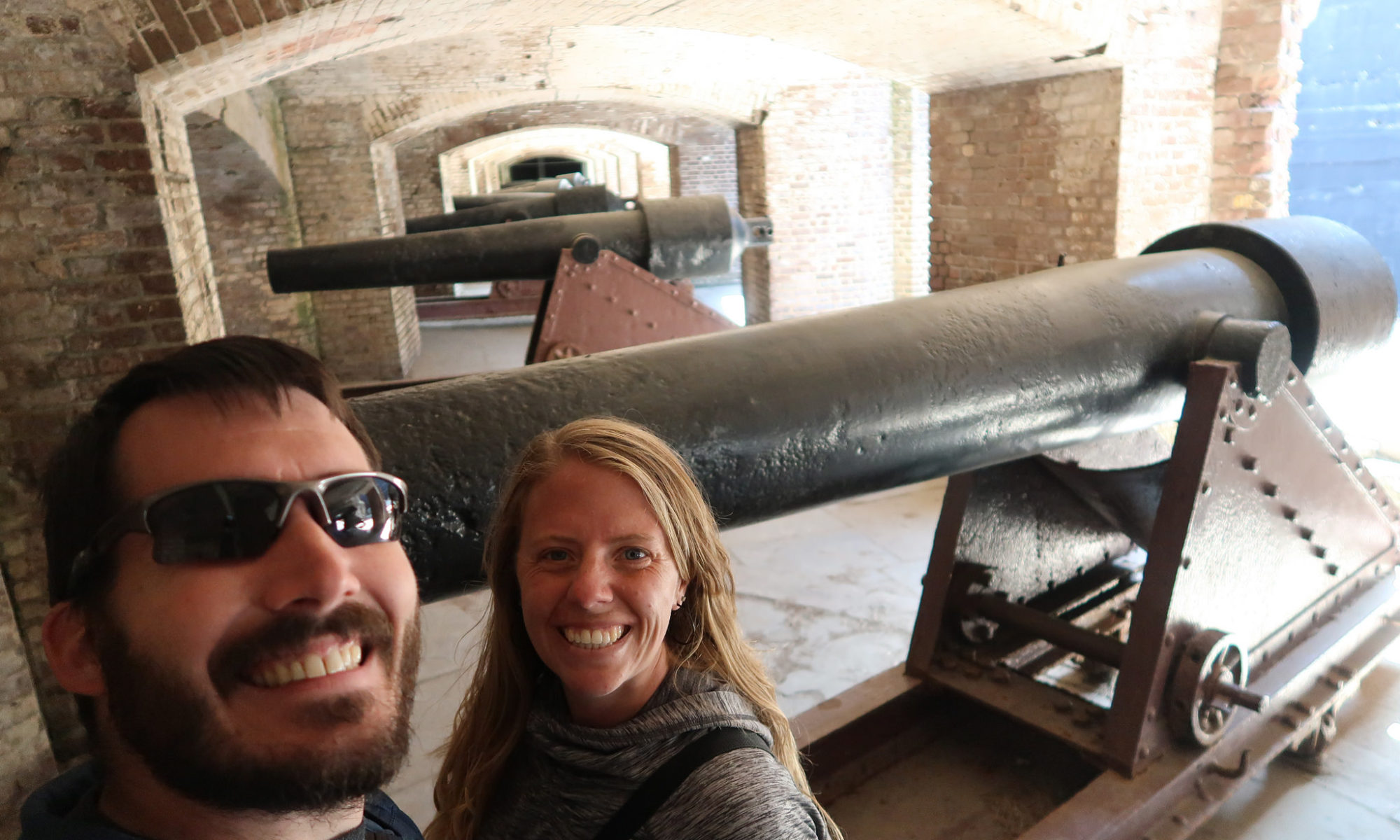 April 12, 1861. Just before the sun rises, a shell explodes above Fort Sumter. The War of Success has begun.

Fort Sumter in Charleston South Carolina is an island fort and the target of the first shots fired during the Civil War.

The only access to the fort is by ferry.

and oh boy is there a line!

We already have tickets, and there are enough seats for everyone… so we’ll just hang back an wait for the crowd to board.

We end up snagging a nice little lifejacket bench at the front of the boat.

It’s a chilly half hour ride to the fort and on the way we see some dolphins!!

Maybe they followed us up from our Kayaking Adventure.

Shortly after, we’re pulling into the fort.

and prepare the disembark

Once in the fort, we have about an hour before the ferry leaves.

There’s some pretty neat things to see, and an hour gives us plenty of time.

Some of the cannons here are huge!!

There is debate whether or not the cannon below fired the first shot of the Civil War.
It is said to have come from a 10-in Seacoast Mortar, but unfortunately, there is just no way to completely confirm that it came from this specific cannon.

Regardless, it’s pretty neat to see such a unique little artifact!

In the brick walls throughout the fort are remnants and reminders from the war that shook these walls.

Walking further along the lower brick hallways, we find a row of 42-pounder cannons.
Of the 318 of these produced, only 29 are known to still be in existence.

The rails in front of the cannon help swivel and aim the massive guns.

While excavating the fort nearly 100 years after the war, I bet the workers were excited to find these things still lingering!

The side of the fort facing the Atlantic is raised,

and views of the surrounding islands, from which originate the first shots.

It is truly amazing to see what survives so long and is still around for us to see.

Today, we only see what remains of the war’s destruction.

The center of the fort now holds a museum and small gift shop.

Within the museum is the original 10 ft by 20 ft tattered flag which flew over Fort Sumter April 12-13, 1861 and survived the Confederate bombardment.

The symbolism of a flying flag was so important to troops during this age.
As the flagstaff shatters from a projectile, members of the Federal Garrison fight through exploding shells and burning timber to nail it back up on a wooden post close by.

Along the left side of the flag are tiny scars from the nails holding the flag to its makeshift pole.

The Palmetto Flag is also on display in the museum.

This flag is the first Confederate banner displayed at Fort Sumter after the evacuation of the Federal garrison.

Its flying time was short, as it was replaced by the official flag of the Confederacy.

As we head out the front gate, we take one last look along the outer walls filled with cannon holes.

It’s time to board the ferry and head back to Patriots Point!