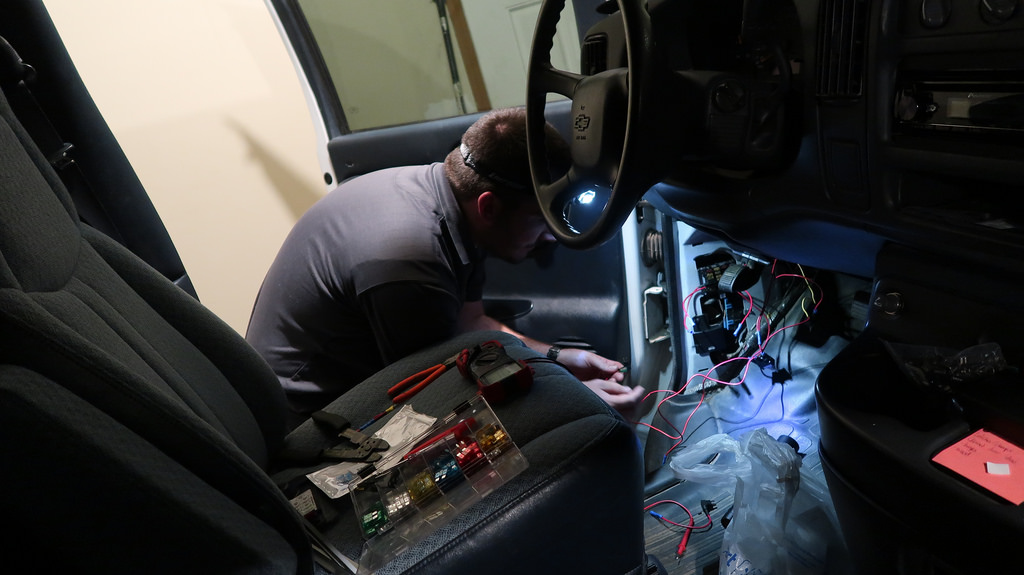 The electrical in the van was pretty straight forward…

When we purchased the van it already came pre-equipped in a two battery configuration; a starter battery (under the hood) and a marine/deep cycle battery beneath the van, behind the driver seat).
Both batteries are wired together, but separated by a solenoid.  The solenoid automatically connects the batteries together after the van is started (the alternator charges both batteries) and separates the two batteries while the van is off (so the auxiliary devices don’t drain the starting battery).

What we came up with was to install a switch, under the front dash, to toggle aux/lights/fan from the front battery (incase no rear battery was present) to rear battery (normal use, so that we don’t drain the starting battery), to completely disconnected (for mid/long-term van storage when we have no need to power anything).

We decided to use most of the existing wiring and taps located in the fuse box under the steering wheel; we opened the panel and…. Where did the fuses go!?

Apparently, which ever company installed the second battery for the previous owner failed to install fuses between that battery and… anything! Kind of a big deal…

Instead, they pulled some of the existing fuses and tied circuits directly together with short segments of wire.

So… that needed to be fixed. We went out and purchased some proper circuit taps, with fuses, and re-accomplished the job (with the addition of the 3-way switch of course).

I guess kind of a side note… but the old driver side view mirror was cracked… so we ordered a replacement from Amazon. It arrived today, so we went ahead and put that in 🙂

To remove the old one, we used a heat gun to soften the adhesive behind the old mirror until it pretty much fell out on its own. We then added the new mirror, which came with double-sided tape.

Also! If you noticed… (probably not), we installed a dash cover by lining the dash and the bottom of the cover with velcro for easy removal and cleaning.

And replaced the rear view mirror!
Well… not exactly replaced; it just clips over the existing.

** We’ll try to get some more photos for this one.