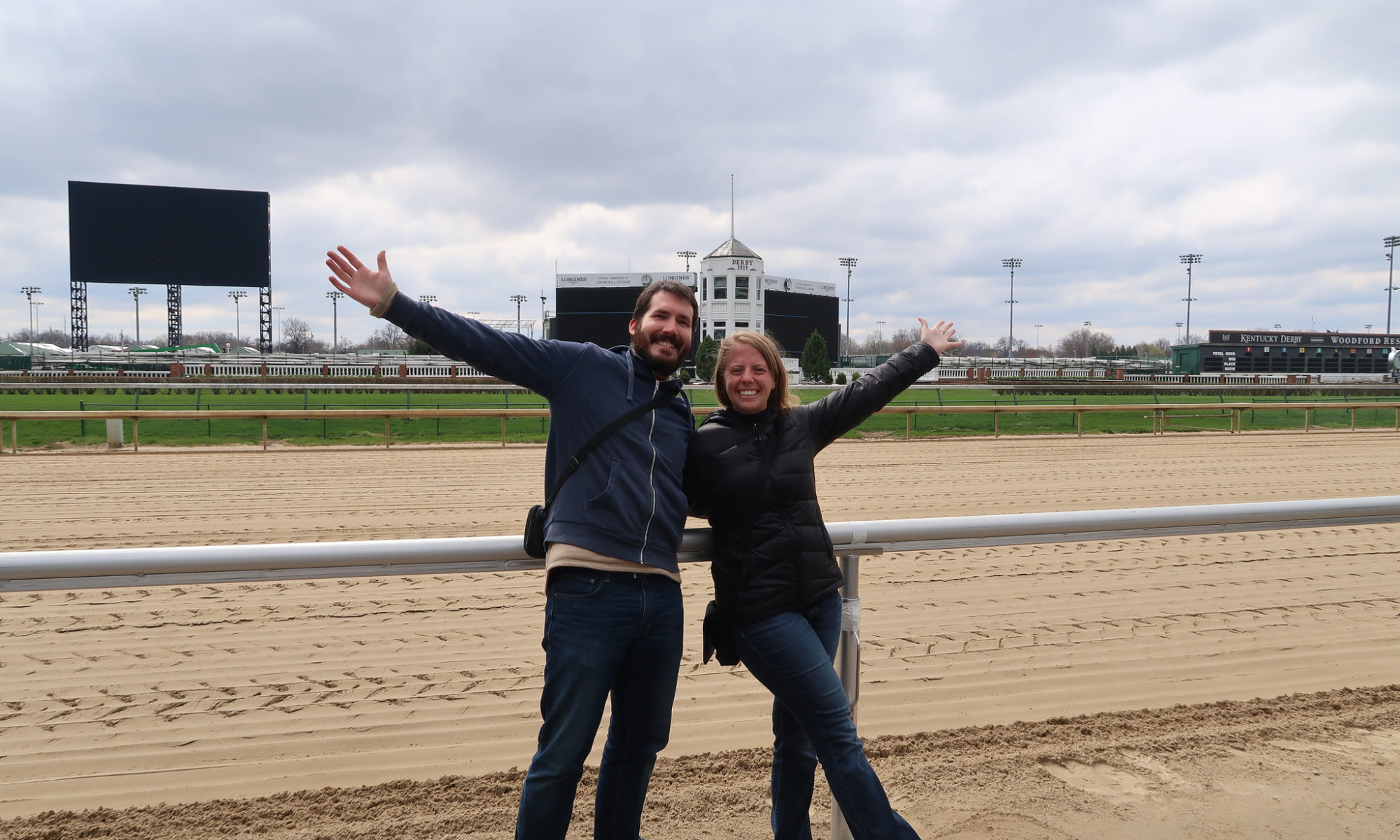 Saddle your horses and get ready for a ride. We’re here at the Kentucky Derby Museum and ready to check out the relics, the history, and the scenery of the “greatest two minutes in sports”!

Our morning begins with frigid temperatures inside and outside the van. Waking up to freezing rain, we’re preparing for a bone chilling day.

After running the van for a few minutes, we can finally see the walmart through the window!

As we’re entering the grounds of the museum, we can see there is a construction frenzy to prepare for the future race.

They have 28 days to complete their construction project in time for the derby!! ⌚

Hope they can get it done!!

Past the construction, we can see the entrance into the museum.

First, a look at Barbaro…

With 6-1 odds, Barbaro won the Kentucky Derby in 2006. Two weeks later he faced his last race.

We are saddened to inform you that during his start at Preakness Stakes, the poor guy fractured three bones in more than 20 places around his right hind leg.  Those who know horses, know injuries like this have a grim outcome.

Even through their best efforts, they weren’t able to save him. His remains lie here with a statue depicting him and his rider Edgar Prado during the Kentucky Derby. 😥

Time to move on to a more festive portion of our tour.

Lets giddy up on into the museum to see the race! 🐎

Make sure to avoid getting trampled by these guys!!

Tommy is going to test his racing skills on his legless horse.

Awe man! He gets passed by one other horse leaving him in Third Place…. At least he “Showed”.

Time to move on to Trivia…

Some pretty interesting facts here. Did you know that a white horse has never won the race?

Kali saddles up to the horse in the stall preparing to run….

Tommy’s horse may be a little smaller, but it’s much more fierce!

They say it’s the horses heart and drive that wins the race.

We even get the opportunity to dress like a jockey!!

Time to get the weight documented before the race.

Most jockeys weigh between 110-115, but have to weigh exactly 126 lbs standing on the scale with their saddle. If they are under, they have to add lead to their saddle.

They are weighed both before and after the race to ensure they don’t magically drop weight to gain an advantage.

We get the opportunity to get a small taste of the thrill and excitement you experience after placing your bets on the race.

There is a mock betting kiosk where we place our bets on the provided horses.

It’s hard to resist feeling anxiousness during the race, watching for your chosen horses.

The Run For Roses

We squish in to this theater to watch a 360 degree video about the Kentucky Derby.

Watching the video, we can’t help but feel the excitement there must be during race time.

After the short video it’s time to head out to the track. We are still having to deal with some Spring Break crowds.

Hopefully, this will be our last week of that!

Our tour guide shares the history and stories of particular horses who have won the race throughout the years.

Even on the inside of the stadium we are having to encounter the construction.

The stairs in this picture are the stairs the jockeys use going from their locker rooms to mount their horses.

Across the way are their mounting stations.

There are 20 stalls here to accommodate the 20 horses and riders that are permitted to race during the Kentucky Derby.

The Kentucky Derby allows more horses than any other race, at 20.

Starting in 1875, the Kentucky Derby is the longest running sporting event in the U.S.. Even through the depression and several wars, it has never missed a year.

Turning around, we are offered the view of the two famed spires, built in 1895.

Taking an even closer look, we see the plaque recognizing Secretariat for his win in 1973.

We are so impressed to learn of this horse’s legacy. He’s not only the winner of the Triple Crown (winning the derby plus two other races in a row), but currently holds the world record for the Derby at 1:59 2⁄5.

He was known to actually speed up throughout the race. During the Preakness in 1973, he won the race even after starting last.

Our tour guide explains that he was such an impressive horse that they performed a necropsy after his death and found that his heart was over two times the normal size of a typical horse.

No wonder he had so much power during his races! 💪💓

Horses hooves click and clack, hearts beats increase, crowds cheer as the horse and his jockey stride through this tunnel.

We can only imagine the thrill the jockeys must have when they emerge hearing “My Old Kentucky Home”.

Even without all of that, we are pretty excited to have the opportunity to travel through the infield tunnel! 😁

Exiting the tunnel, we head toward the Winner’s Circle.

We are so close to the track, we are able to feel the surface of silt, sand and clay the horses race on.

Looking to our left, we can see the starting line marked by the white pole with orange (way at the end).

On our right is the finish line.

Seeing the stands empty during this time, it’s hard to imagine their record breaking crowd of 164,858 spectators in this one stadium.

On derby day we would see the bugler for the race come out thirteen times to play his bugle before each race.

Looking in to the general admission portion of the grounds and hearing of the crowds, we appreciate the installment of the big screen behind our heads to watch the race.

Having the opportunity to stand where so many horses and jockeys have stood after their triumphant race is pretty exciting for us.

The Winner’s Circle for the Kentucky Derby is so special, it gets its own station out at the Pagoda. Only a horse which has won the derby is ever allowed into this circle.

Back at the gift center…

Kali can’t help but try on the adorning hats

If you’re ever planning on purchasing a hat from here, plan to bring a heafty checkbook.

The price tags of this hat reads an astonishing $225!!!

That’s all from us today, at the derby. Until next time!