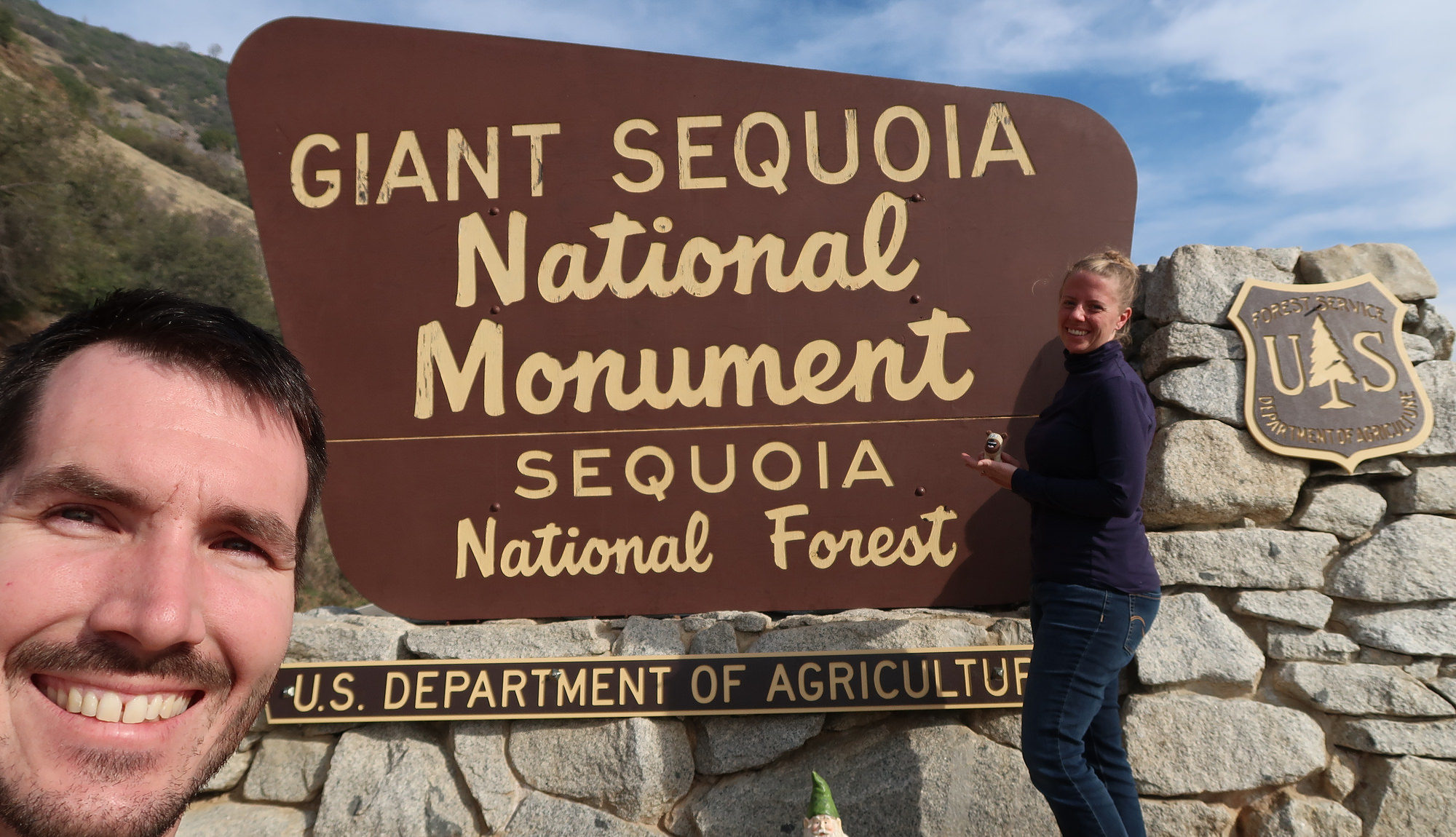 With our adventure in Yosemite behind us, it’s time to look forward!

Our plan is to pass through Sequoia National Park, spend the evening sightseeing, then camp in the park. We’re not spending much time here, so we have to prioritize what we want to see.

No no, not the WW2 General; the tree!
and not just any tree…. The LARGEST TREE IN THE WORLD (by volume).

If we have some time we also want to check out the Tunnel Log (a downed tree you can drive through) and Crystal Cave.

At The Edge of The Trees

It’s far from the Redwoods where we technically enter the Sequoia National Forest.

Not sure if anyone’s noticed already but Gerome makes an occasional appearance in our photos.

We picked him up in Jordan and he’ll be making the journey along with us; so keep an eye out!

We have two other little guys… also seen in photos who we’ll introduce later!

The drive through Sequoia grows from wooded foothills into forest and gives us quick glimpses of giant redwoods scattered through the park.

We’re excited to see the largest tree of them all…

After a short while, we arrive at General Sherman.

The tree is a short walk from the parking lot, on which you get the opportunity to walk through a downed tree tunnel!!

Further up the trail we run into an older couple from Minnesota taking pictures in front of what they thought was General Sherman.

They almost left after a picture in front of the wrong tree!! 😮

We chat a little about their son who was once stationed at McChord AFB. It’s amazing how the military can connect and bond total strangers!

A short while later, there it is!
It’s not so big…

Until you start getting up to it…

It’s difficult to fit the whole tree in a picture and include the sign!

The area is full of other large trees and a cross section of a tree stump.

As we leave General Sherman and continue through the forest we make a stop at the Visitor Center.

A ranger breaks unfortunate news to us and two of the sights we hoped to see are closed for winter. 😲

While winter is great for the parks being less crowded, there is a downside. So… Next time!!

The ranger does point out anothing interesting sight just along our route to the campsite, Hospital Rock. We’re not exactly sure what it is… but we’ll keep an eye out for it!

Back to the Road

With General Sherman checked off our list, we continue our drive through the trees with what might turn out to be an excellent sunset!

It isn’t long before we turn-off for Hospital Rock.

In visiting, we learn the site was occupied by by a tribe of Native Americans as far back as 1350 A.D.

The wall hasancient pictographs from these Native American artists.

The area is beautiful

and with the sun setting, it’s time to continue on to the campsite.

A Sunset to Remember

The drive is stunning…

We make it to the Potwisha Campground with just enough light to set up.

We close out the evening with some leftovers of my Aunt Doreen’s lasagna… something everyone should have the opportunity to try.

Thanks Doreen, it’s really good!!!
Even heated over a campfire🔥 🍽😋