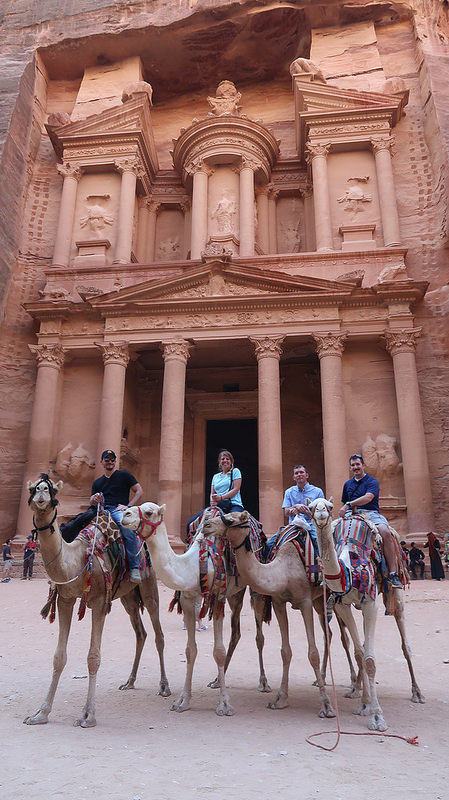 “A rose-red city, half as old as time”

Petra is a city seen to be believed.
It is of course, one of the 7 Wonders of The World!

We pick up our pocket guide…

and begin our long, long hike!

It takes a full day to explore this city.
We’ll try to see as much as we can, but with so many secret paths and back roads to explore, it’s going to be difficult.

Right out of the gate they offer horse rides… and our tickets included a free one.

…But we decide to walk 🙂

It’s a great hike and we quickly start to see small structures and dwellings carved into the rock.

Petra was originally home to the  Nabataean Kingdom, a group of nomadic Arabs.

The city reached its full splendor in 106 AD when it was absorbed into the Roman Empire and became a trade point along the Petra Roman Road.

The carvings here are really astounding, and even some of the natural rock formations are pretty sweet looking!

After a short hike through the outer city, we enter into the towering cliff-side (and the end of the horse ride had we taken it).

It was cliffs and the surrounding mountains which kept the Petra safe (and eventually forgotten) for so long.

A water management (mini aqueduct) system runs through the city.
Check it out along the left side of the path seen below.

Today, carriage rides are offered through the narrow cliffs… but we again chose to enjoy the surroundings at our own pace.

We continue walking when the cliff-side suddenly opens to this…

Incase you don’t recognize it… this is also the Indiana Jones entrance to the Temple of Doom!!! …and what I’m really missing is an Indiana Jones hat!

I wish I thought to bring one… 🤠

All around, the locals are not shy to try to make a buck!

We are surrounded by merchant stands of all sizes.

…and plenty of cool dudes on camels 😎

It’s quite amazing, the effort that must have gone into carving the stone.

We continue along the descending slope, away from The Library and towards:

This thing was capable of seating 8500 people! …as its seats come all the way to the opera floor.

It would be terrible to ignore the local animal population…

So here we have a Donkey…

And what a fine specimen he is!

These buildings are tombs, created prior to the Roman annexing in 106 AD.

Petra was eventually struck by disaster!
Since becoming a trade hub under Roman control, it soon started to become second to other growing cities and in 363 AD an earthquake struck, destroying many of its buildings and crippling its water management system.

Many residents began to abandon the city…

A major earthquake struck again in 551 AD, further weakening the city.
It was later invaded when the Arabs conquered the region in 663 AD.

Petra began to slip back into obscurity, until rediscovered by a Swiss traveler in 1812.

As we continue, we walk through the back end of the city and encounter more private cliff dwellings, but on a grander scale.

It’s a little hard to believe, but some of the ancestral Nabataean people still live (or maybe just hang out?) here in Pera’s ruins.

There isn’t much to the carved out dwellings…

Just enough to provide basic shelter from the elements.

While scoping out the map in the beginning of the trip, we spotted a marker at the very back labeled The Monastery.
After asking some locals, we learned it’s quite a hike but well worth it if we’re capable.
We’re also promised some of the most beautiful views in the city…

So that’s where we’re headed!

Having crossed most of the main city, it is now time to start our climb up into the mountains on the back side of the city.

This is where the long climb to The Monastery begins.

until the opportunity comes to sneak up on some goats.

Shhhh, I don’t think they see me…

It’s difficult not to enjoy these little fellas 😛 🐐

Anyway…
Back to climbing!!…

We’re not the only ones climbing…

When finally… the ground becomes level.

Petra’s largest monument, It’s even more amazing than we could have imagined… in fact, The Treasury is pretty puny in comparison…

This thing dates back to the the 1st Century BC.

After finally reaching the top, we relax…

We enjoy the view…

We make another donkey friend…

Then we explore some more.

The Top of The World!

We encounter a million signs, all claiming their view is the best…

and we explore them.

The way back down, is the way we came up.

We make sure to befriend the local goats…

There’s a crazed look to these two…

(We did promise more goats 😉 )

and he’s willing to haggle 🙂

Finished with our mountain decent, we’re back at the city’s floor.

and this is probably one of the coolest things we’ve done. It’s a must do for anyone traveling here.

The owners of these camels happen to be professional camel racers… so they get us going pretty fast!!

and what a cooler place to ride a camel than the Rose City!?

It’s been a blast seeing such a cool place.
Thank you for staying with us on this long adventure!
We hope you enjoyed it :).

Check out our Petra photo gallery!

…and until next time!