It may be foggy out, but we’re ready for an adventure on Mackinac Island. This 3.8 square mile island has a lot to offer visitors from beautiful hikes, to delicious fudge and food of all types.

We’re excited to see how an entire island can ban cars!! Except a couple emergency vehicles.
Horses, bikes, snowmobiles, or your own legs are the only means of transportation on the island.

We have about an hour before the ferry. Due to the likeliness of raining, we grab ourselves some awesome Michigan rain jackets.

Our ferry finally arrives and it’s time to board. 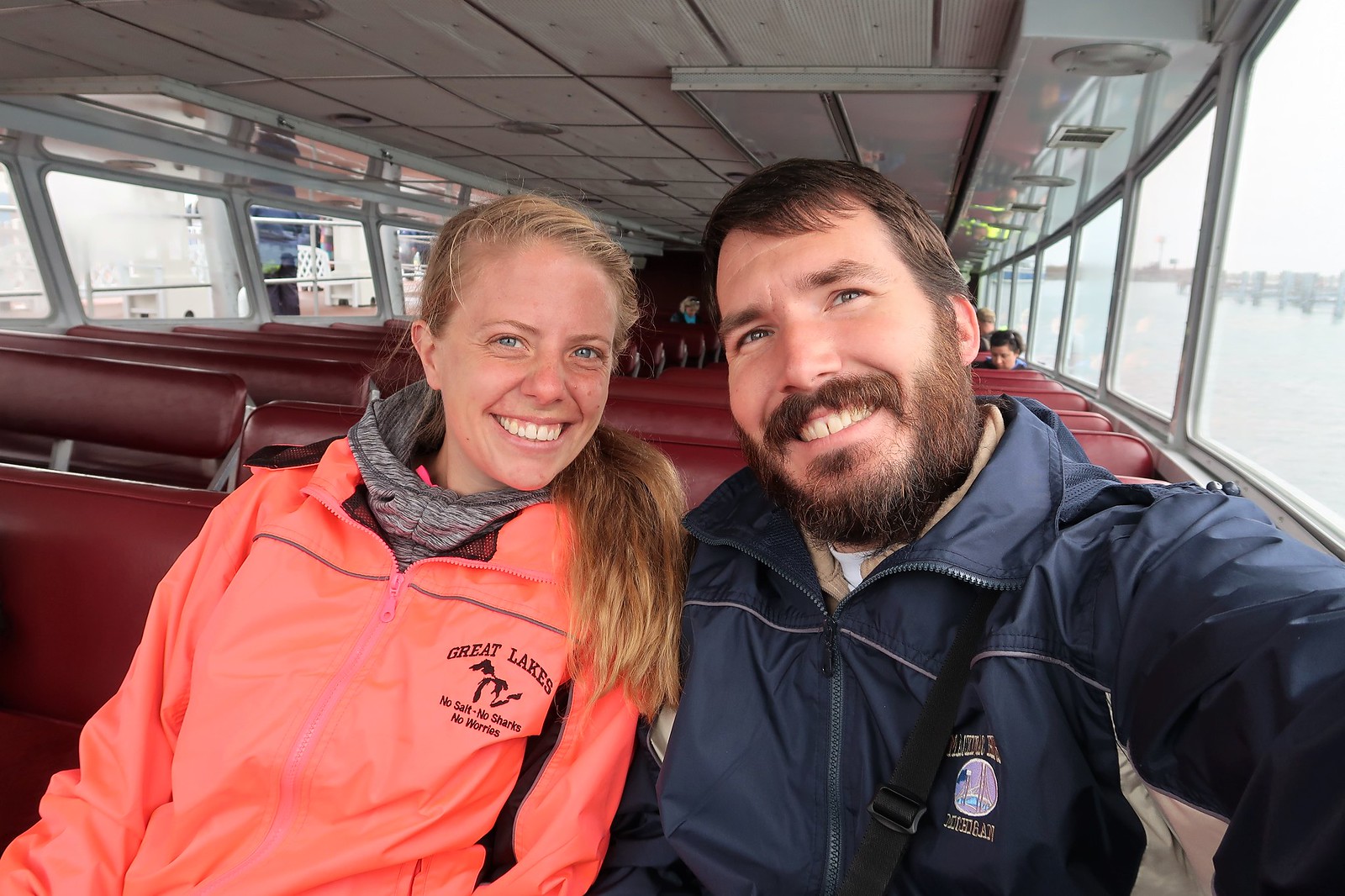 The ferry ride over is filled with fog, not allowing us to see too far out.

As we arrive we see massive amounts of bikes painting the island. 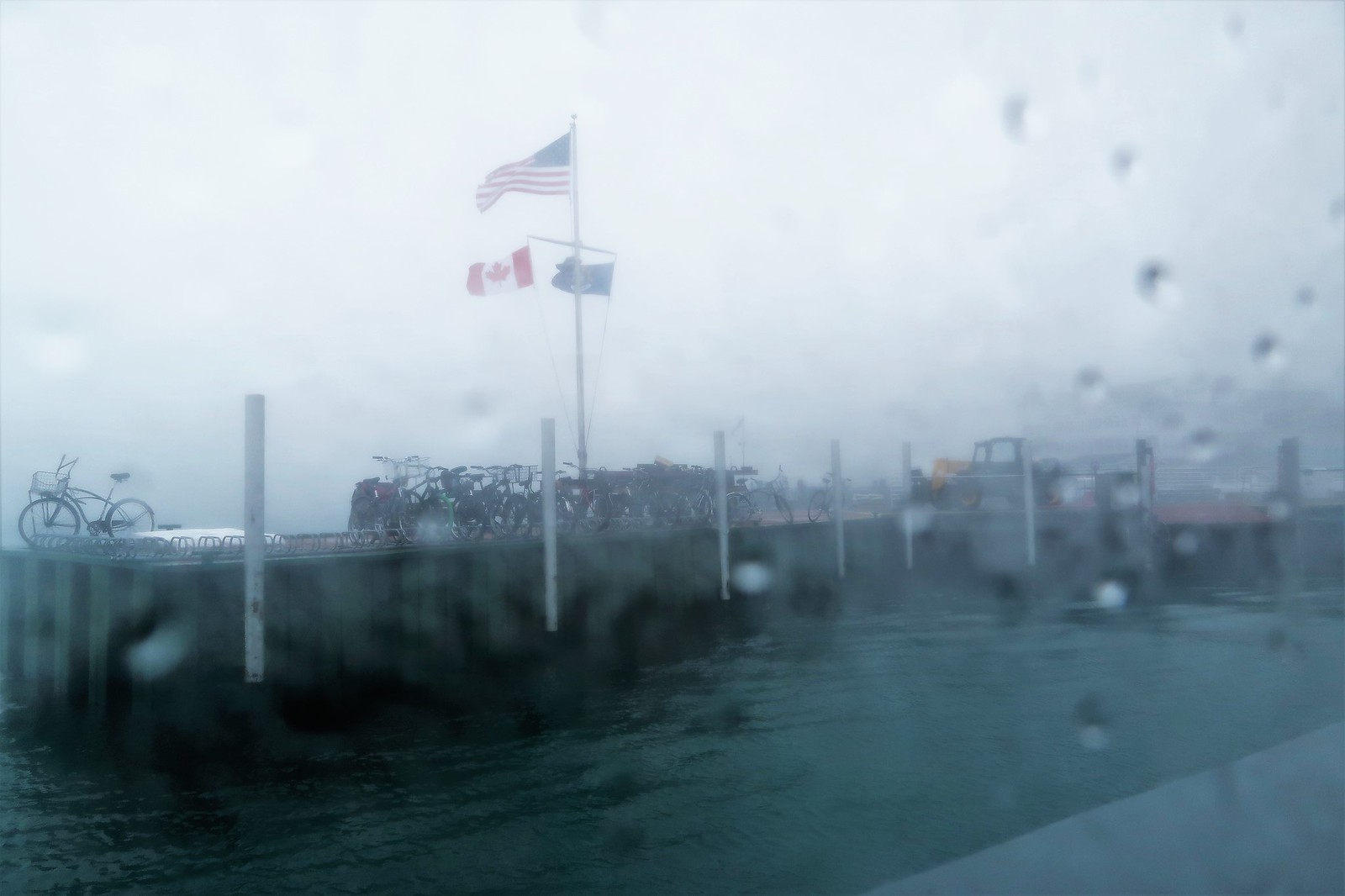 Most people pronounce Mackinac with the “k” sound at the end. Locals actually pronounce it Mackinaw. 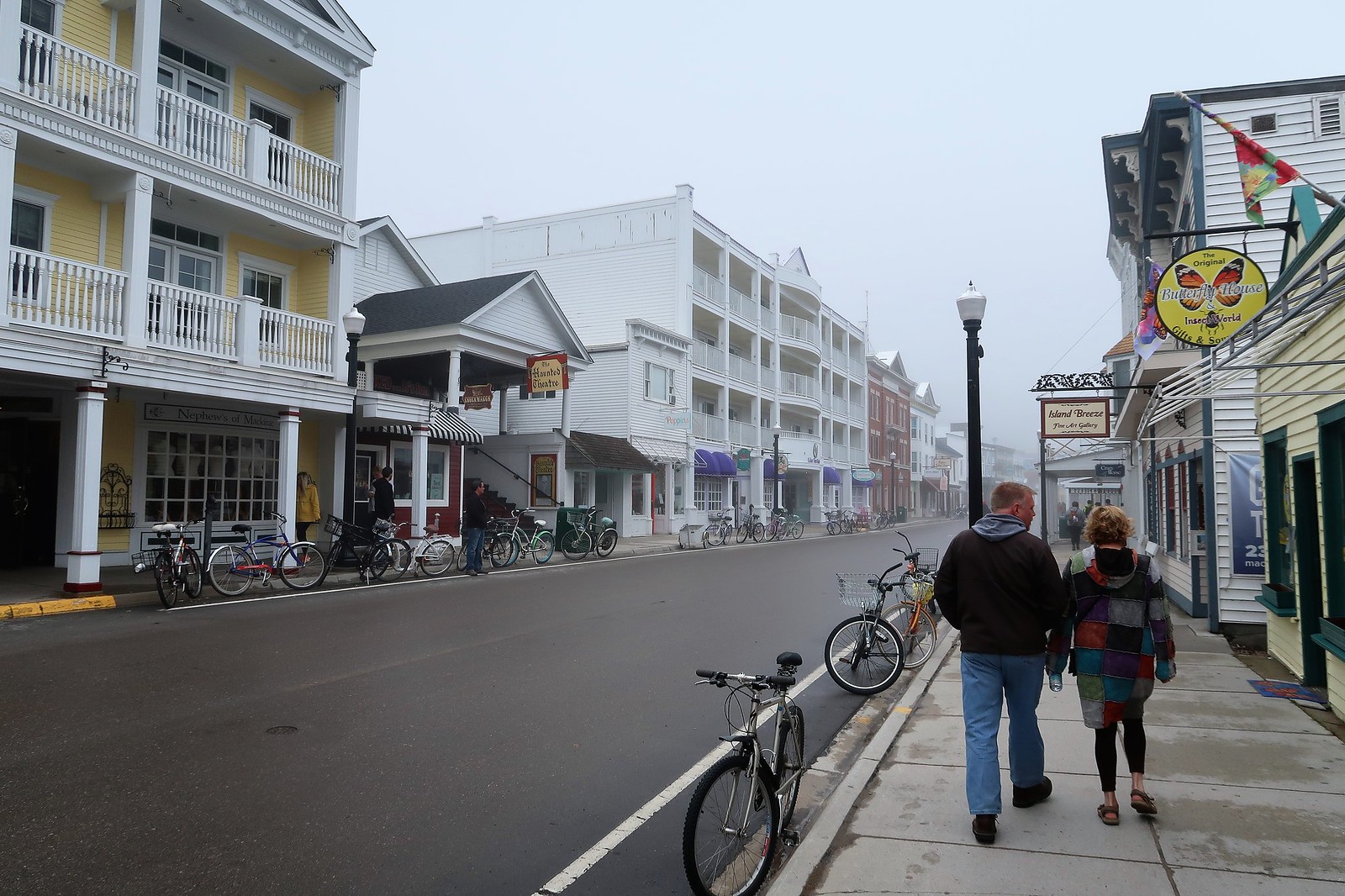 This place fills up during the summer months, but fortunately, we are left to ourselves to wander the island.

Just outside of town, we come across the islands 0 mile road marker. 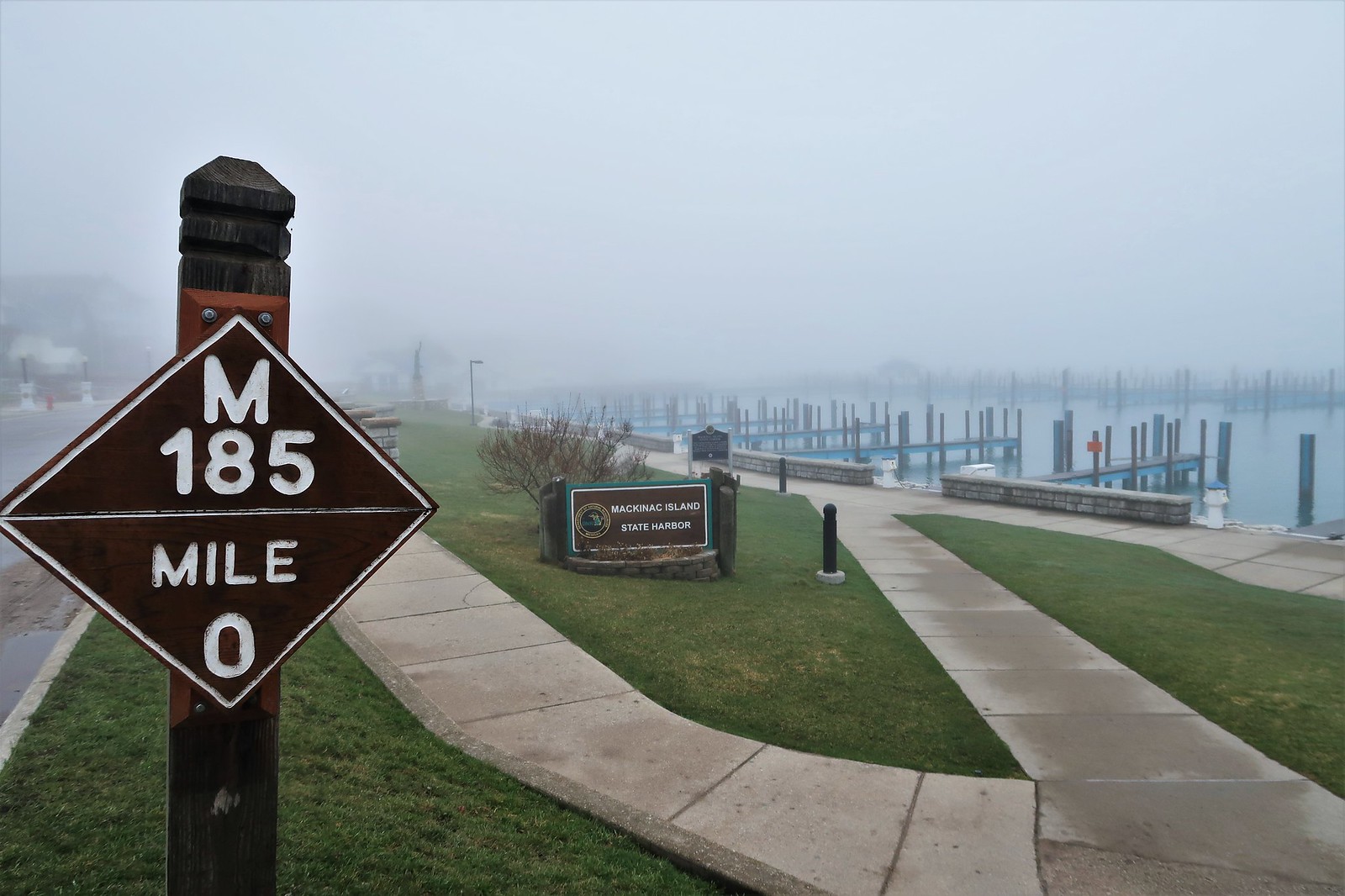 They even have their own version of the Statue of Liberty!! 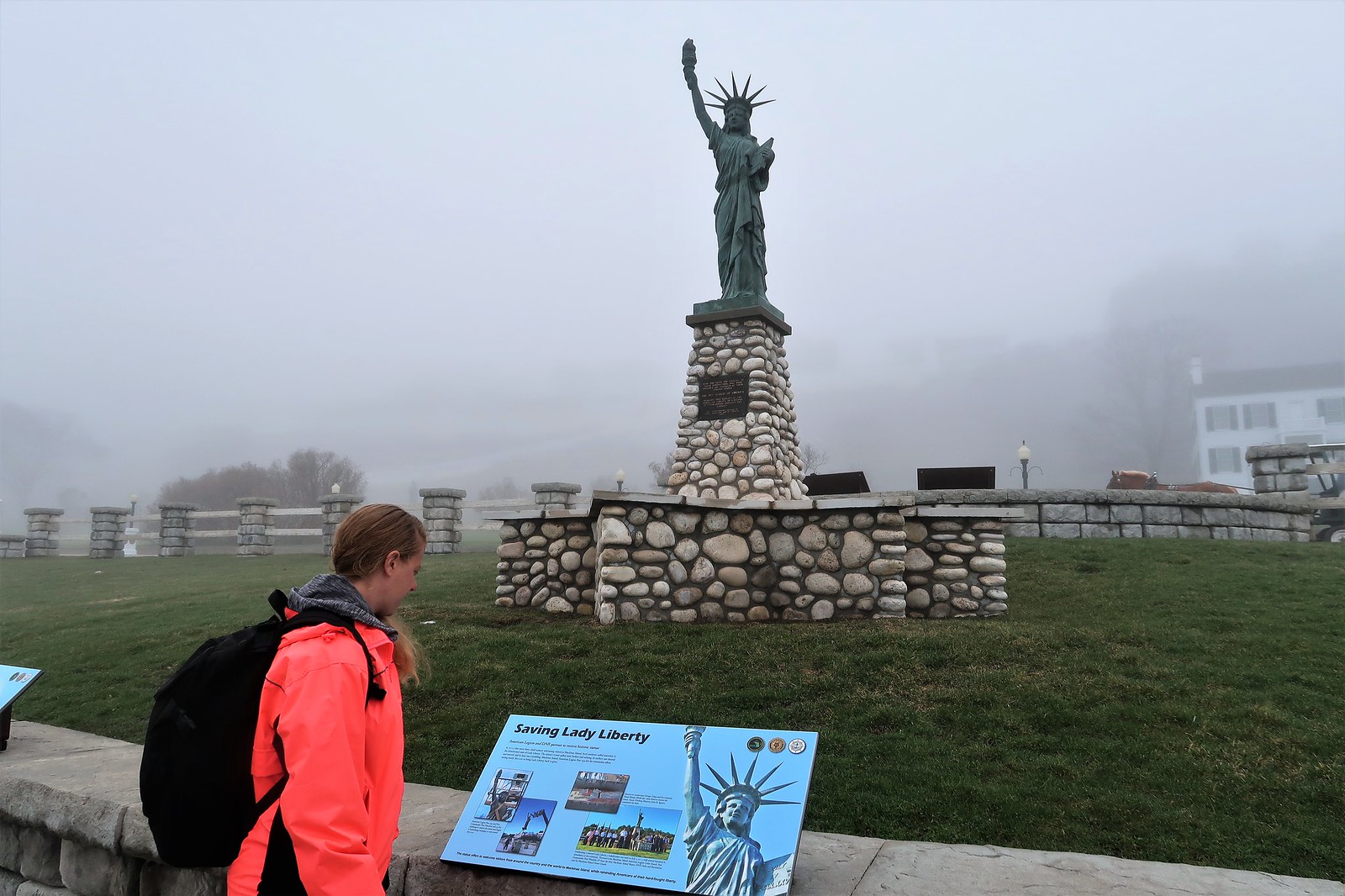 The water is so shallow and clear near the shore. It looks cold, but it’s beautiful! 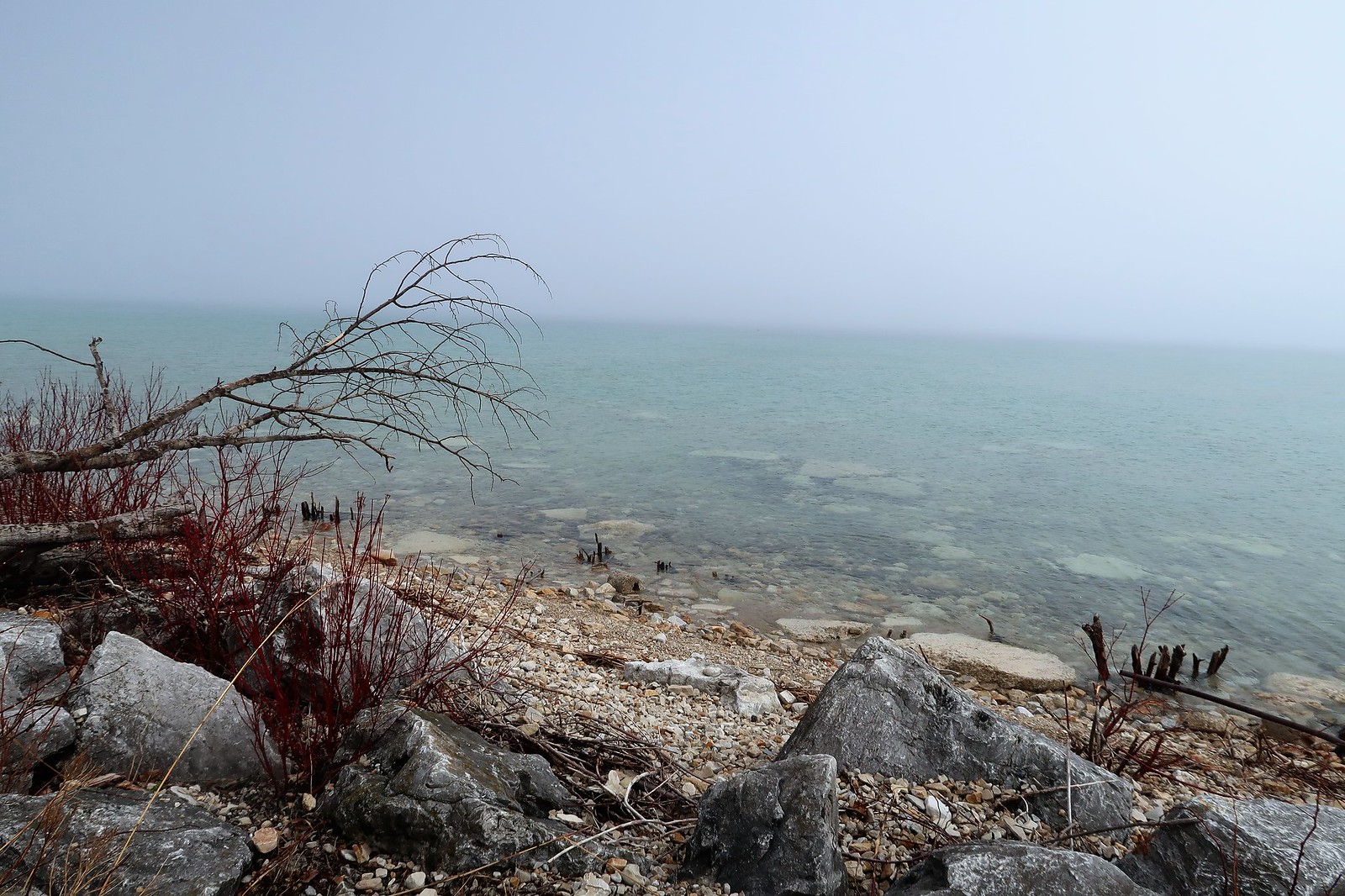 Mackinac State Park is the first state park in Michigan. 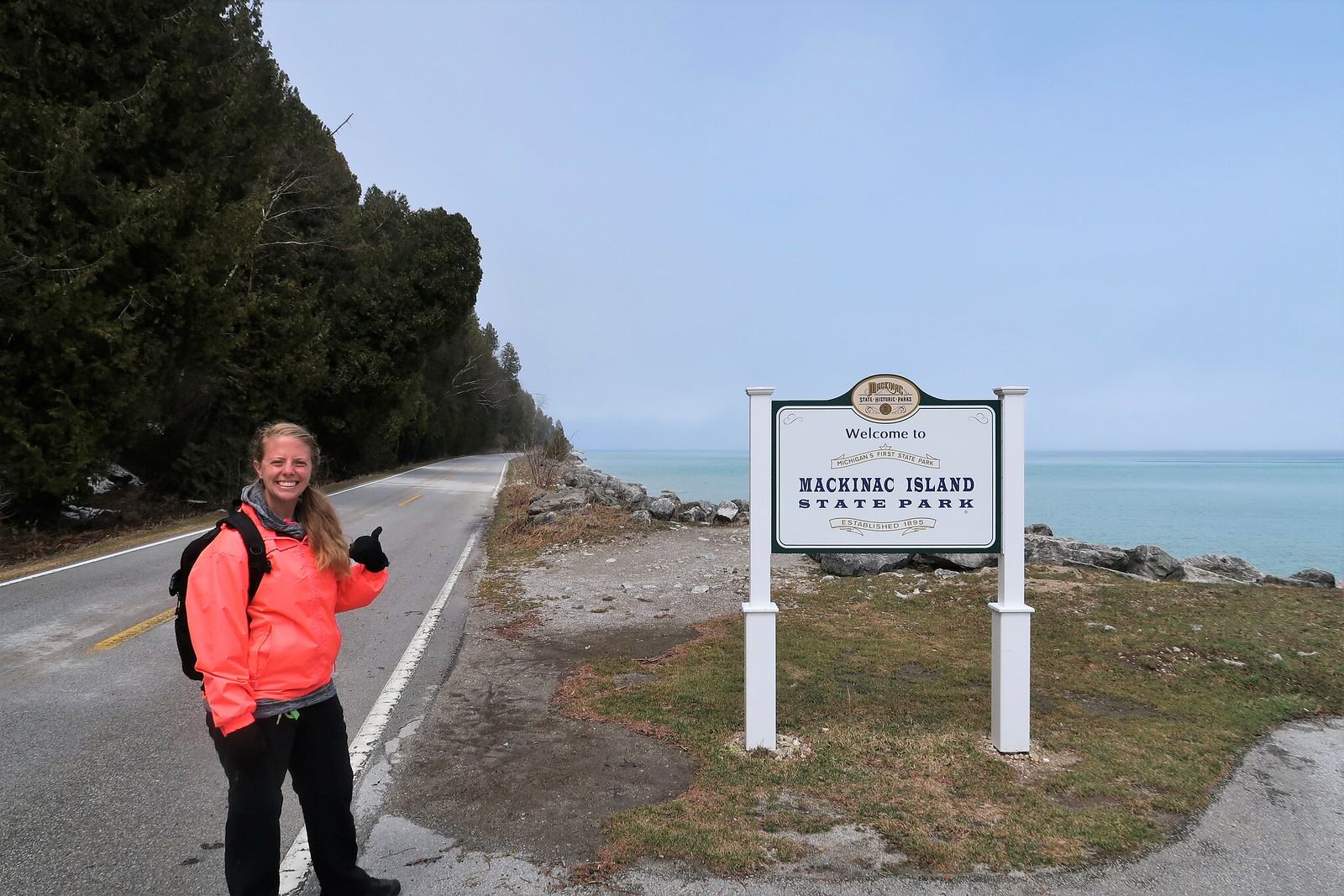 We come across this natural water hole.
While it says that the water is not safe to drink, Kali cannot resist quenching her thirst. 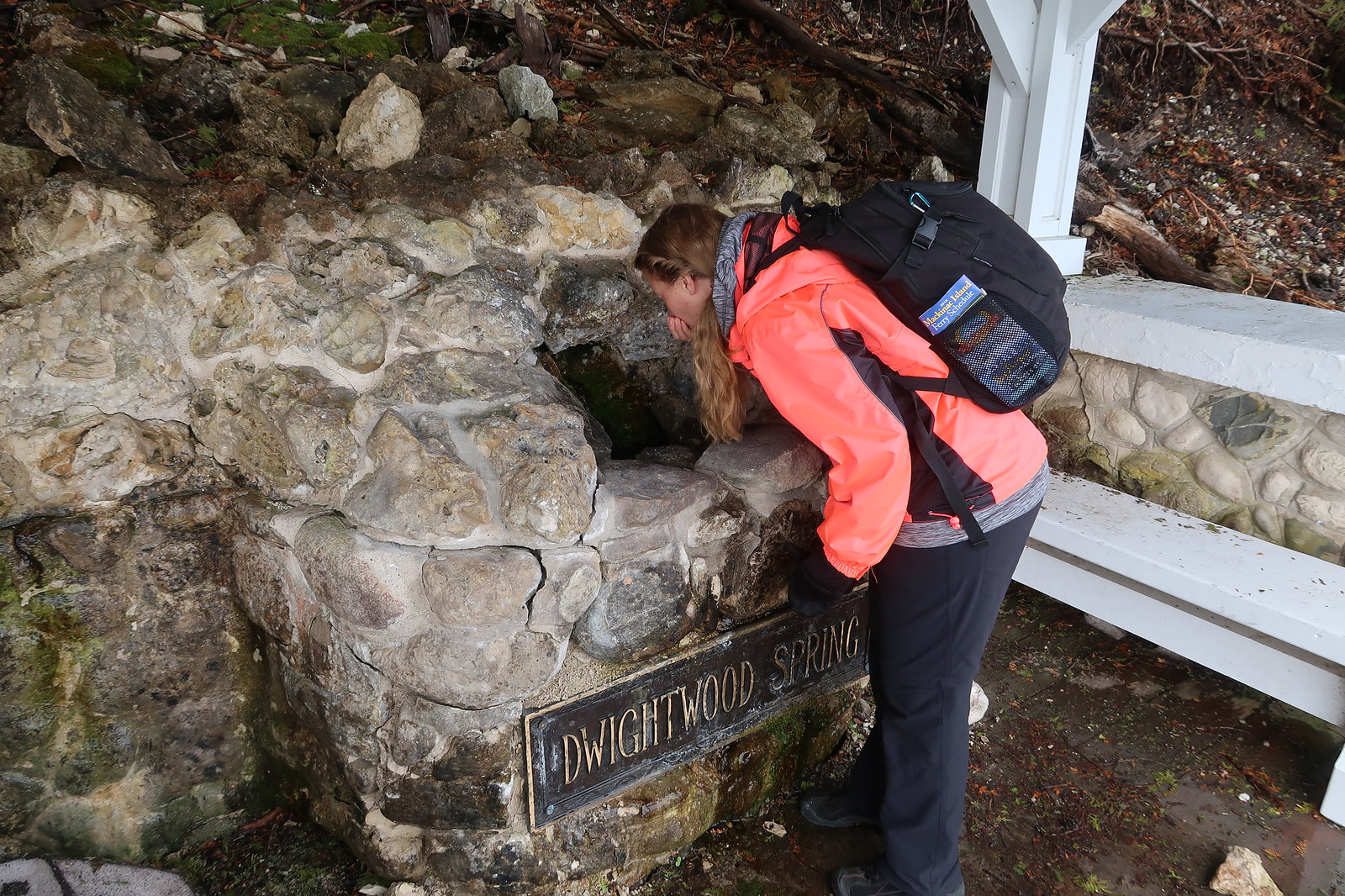 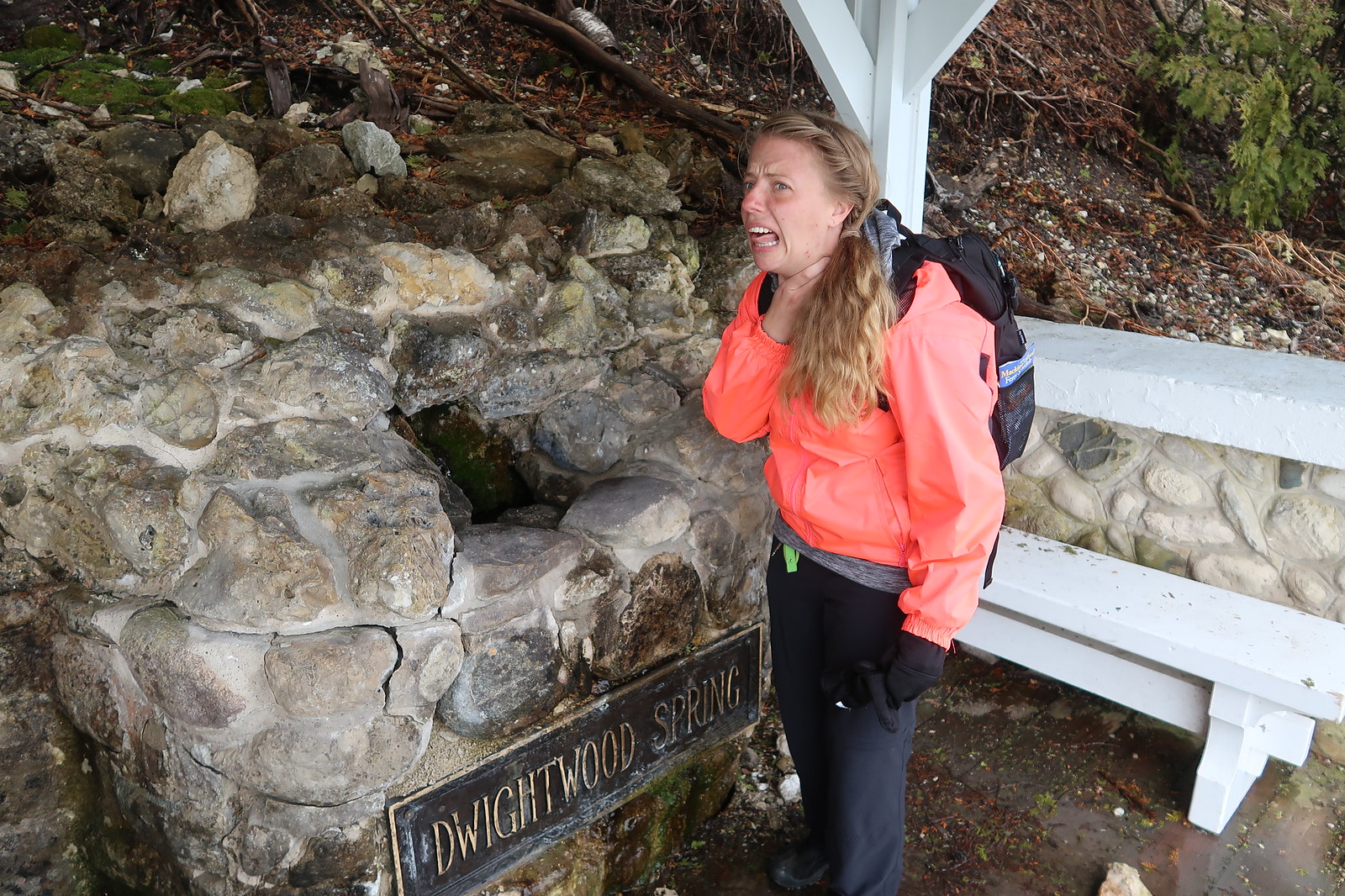 Not long into our walk around the island, we come to a set of stairs 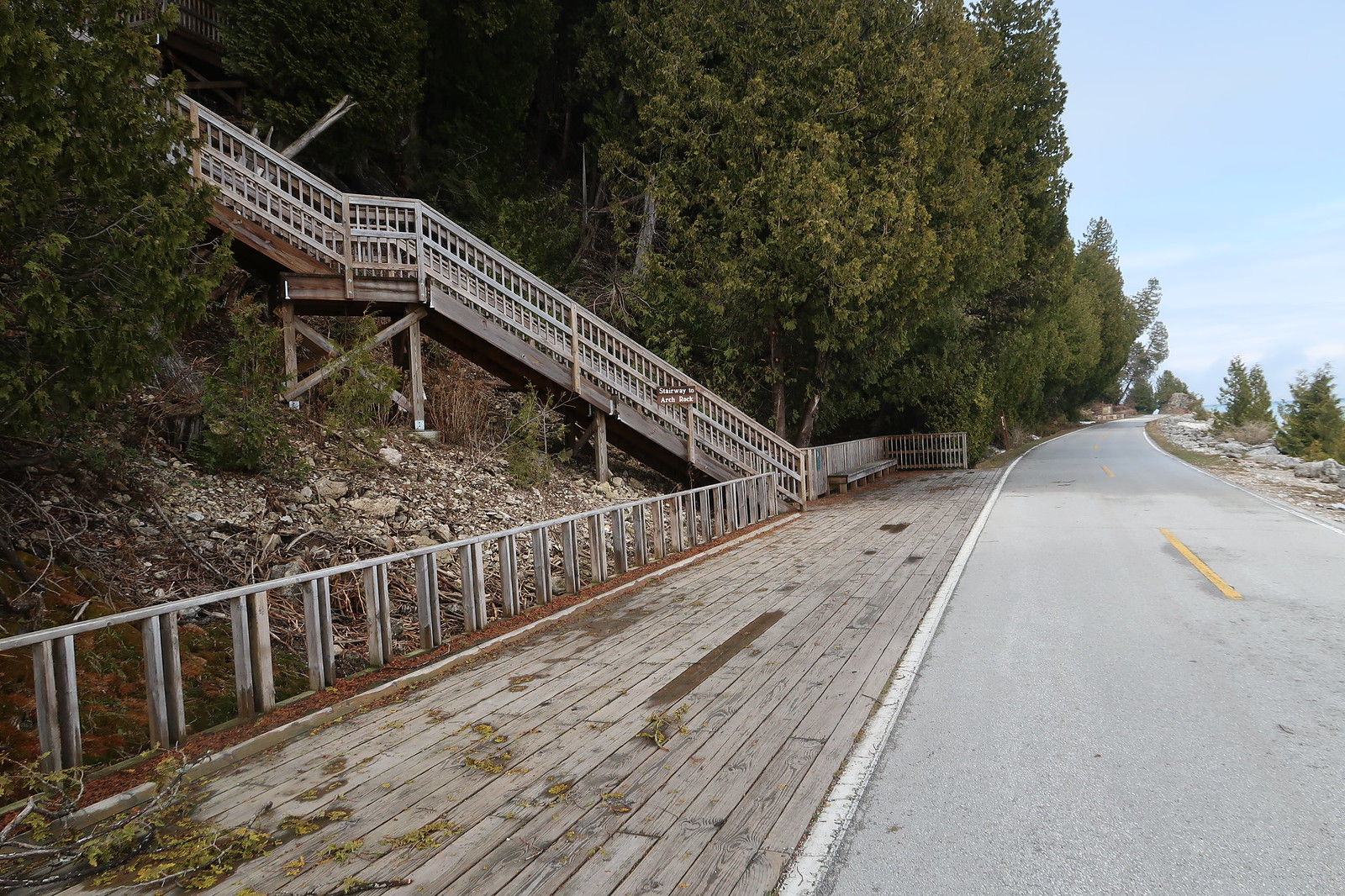 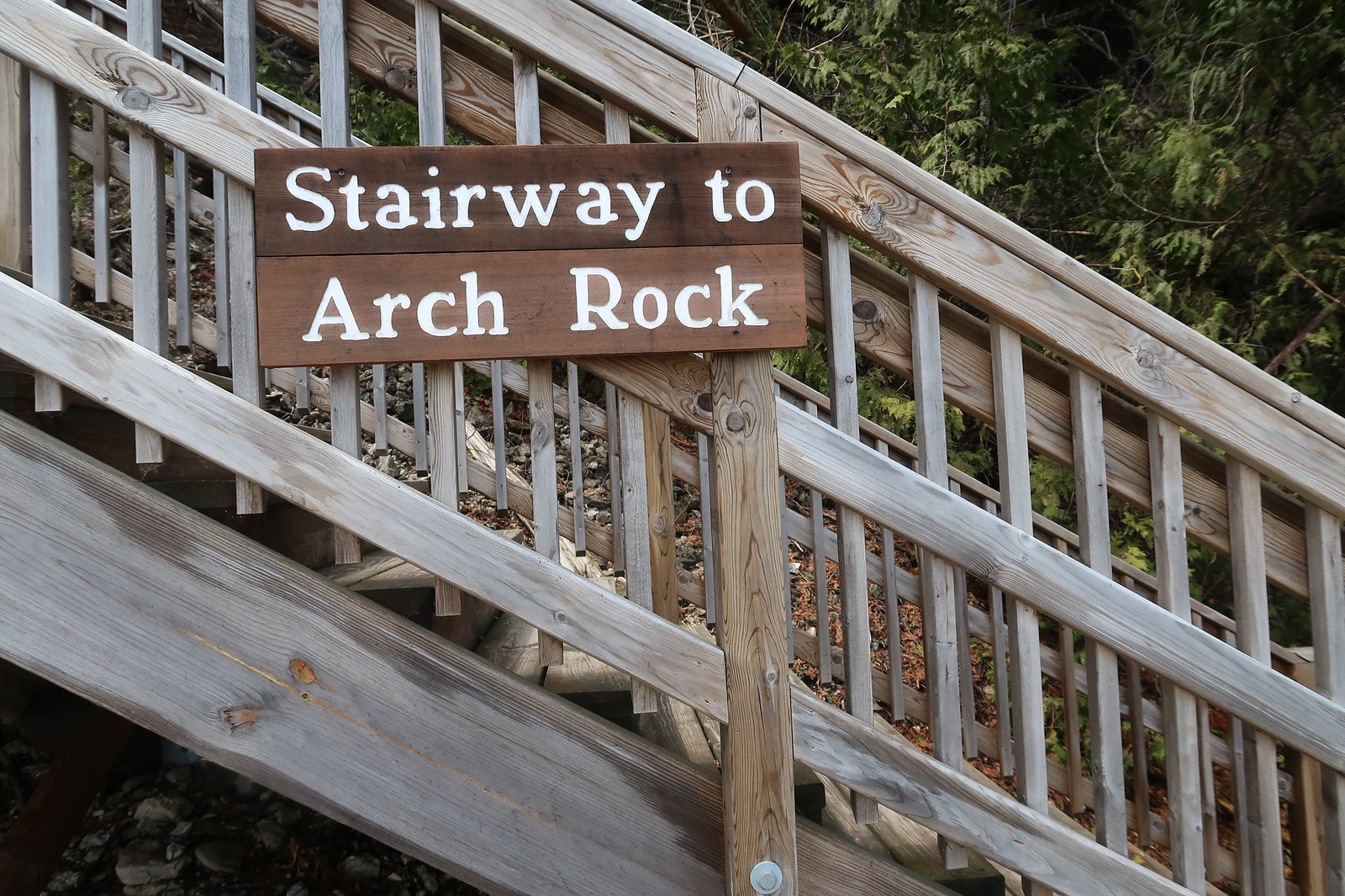 After climbing numerous flights of stairs and catching our breath, we arrive at the Arch Rock! 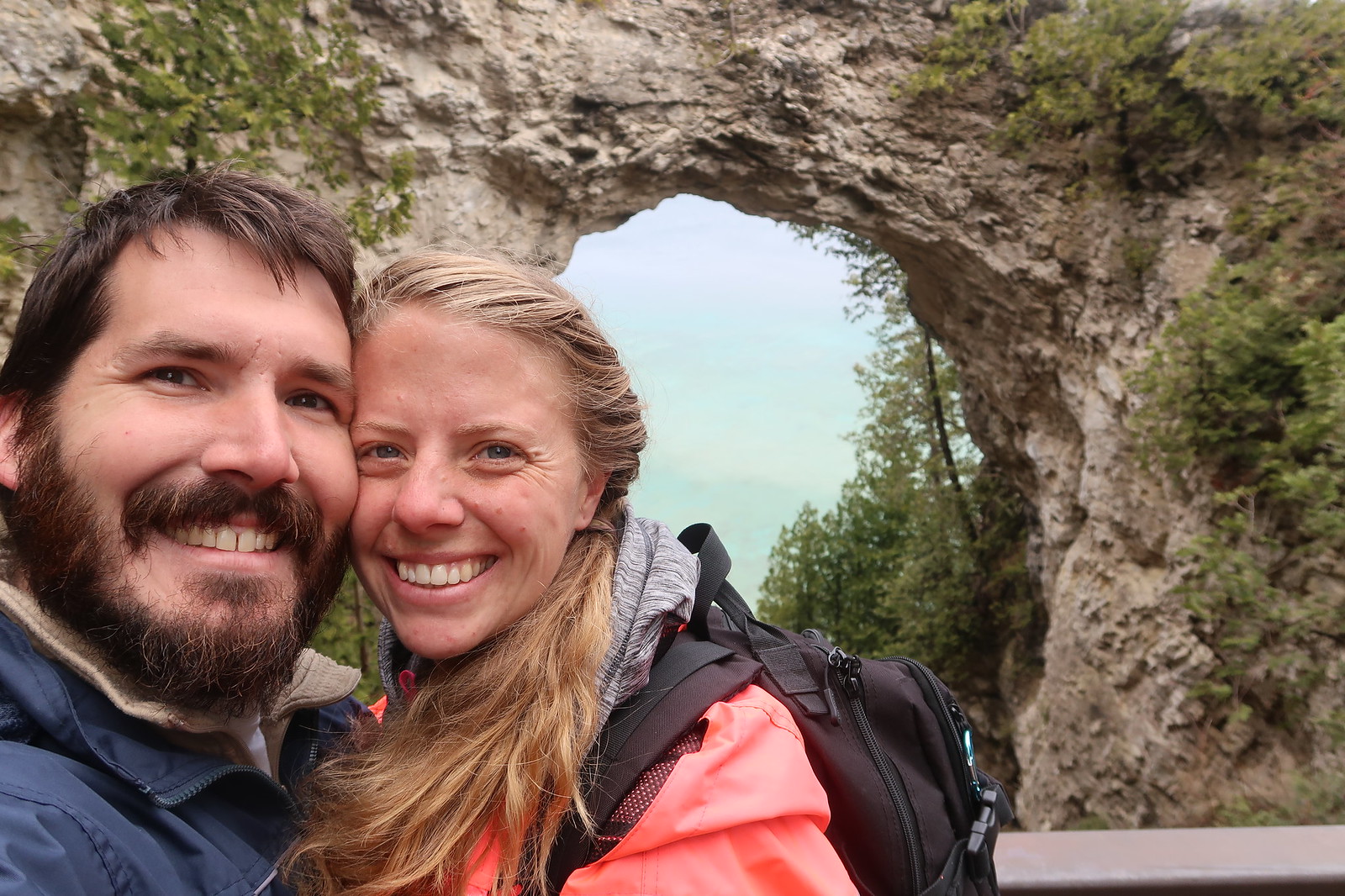 What a beautiful frame into the waters below! 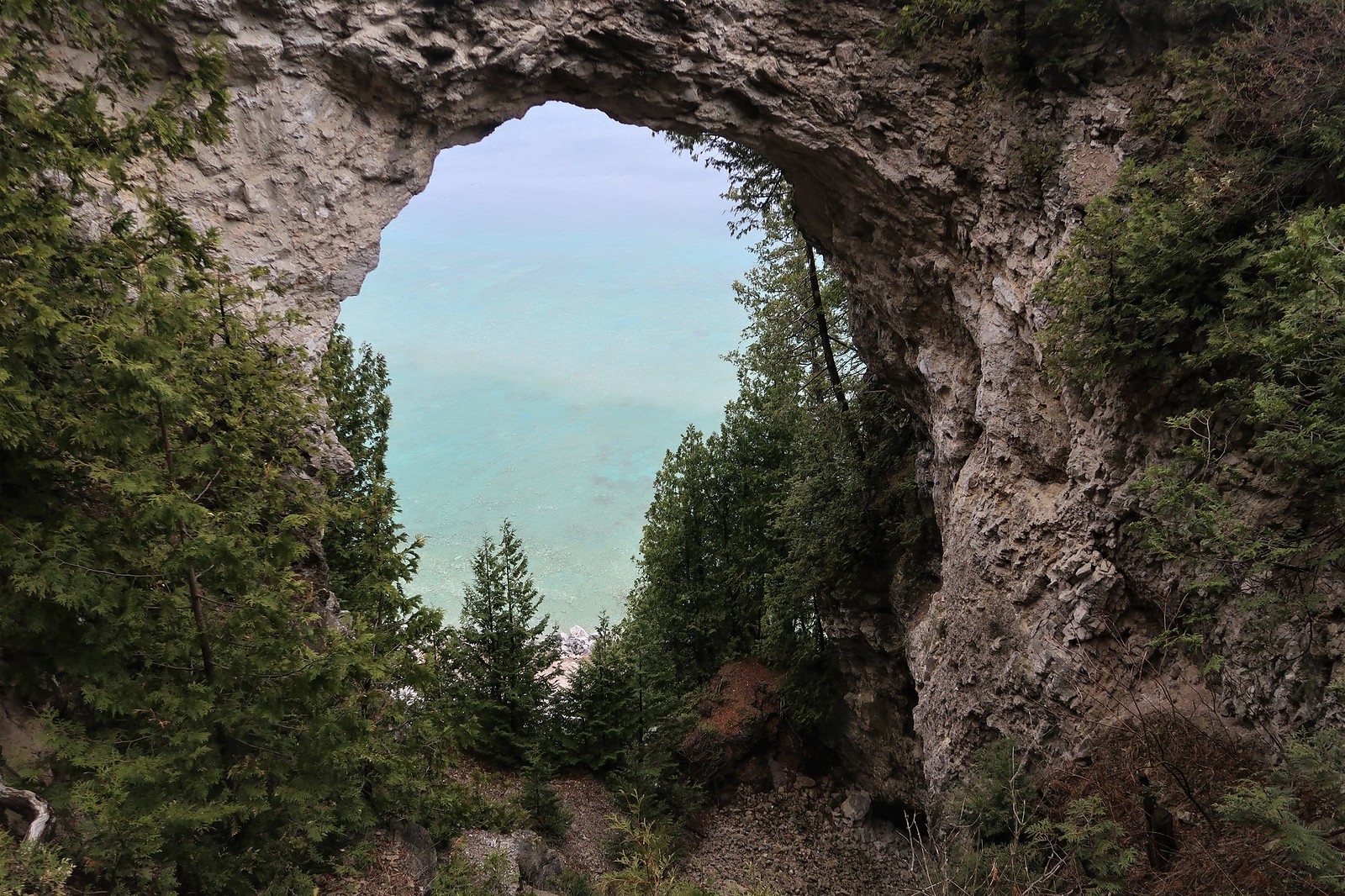 It is crazy to think how big this lake truly is. We can’t see land for miles! 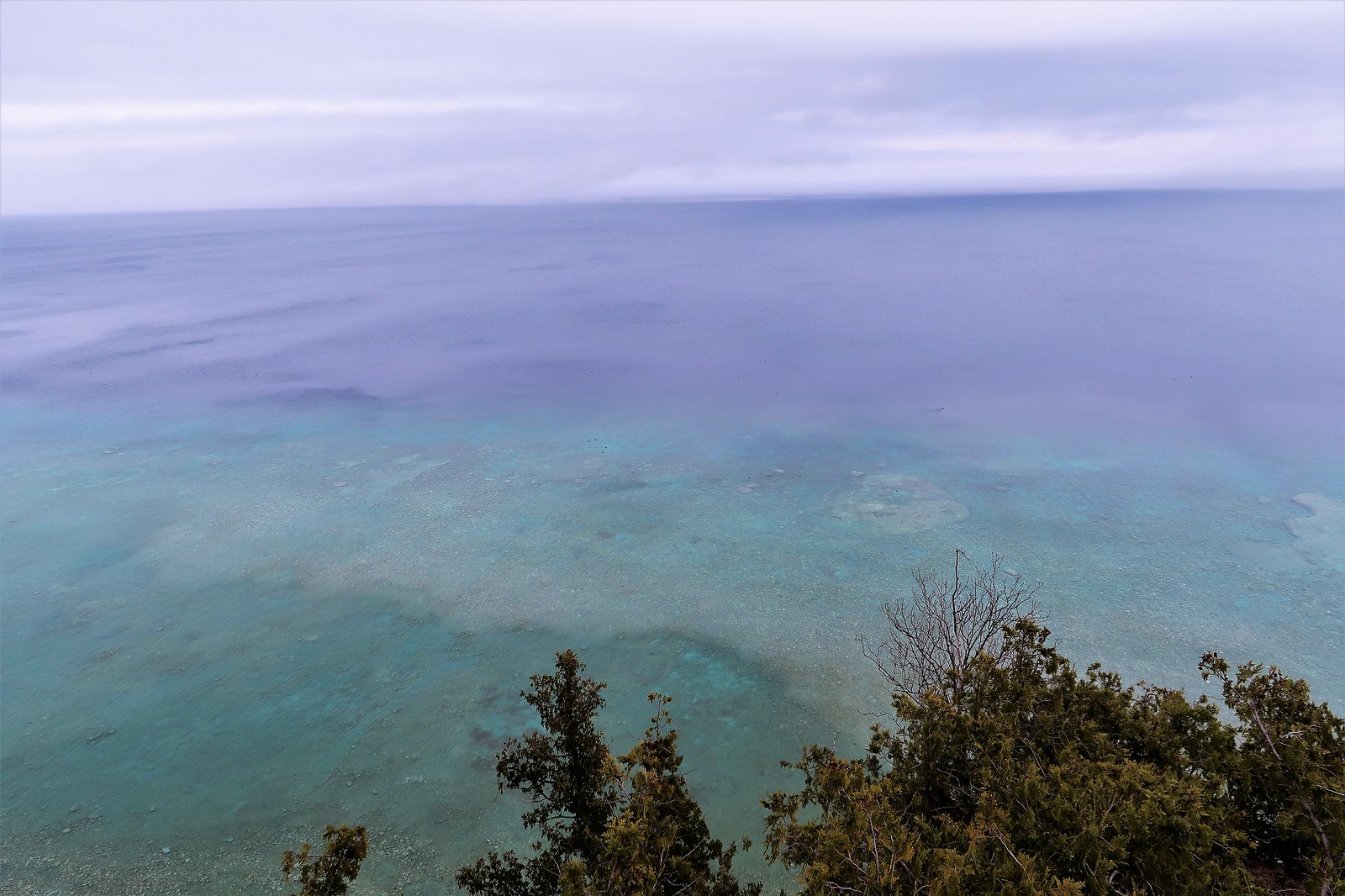 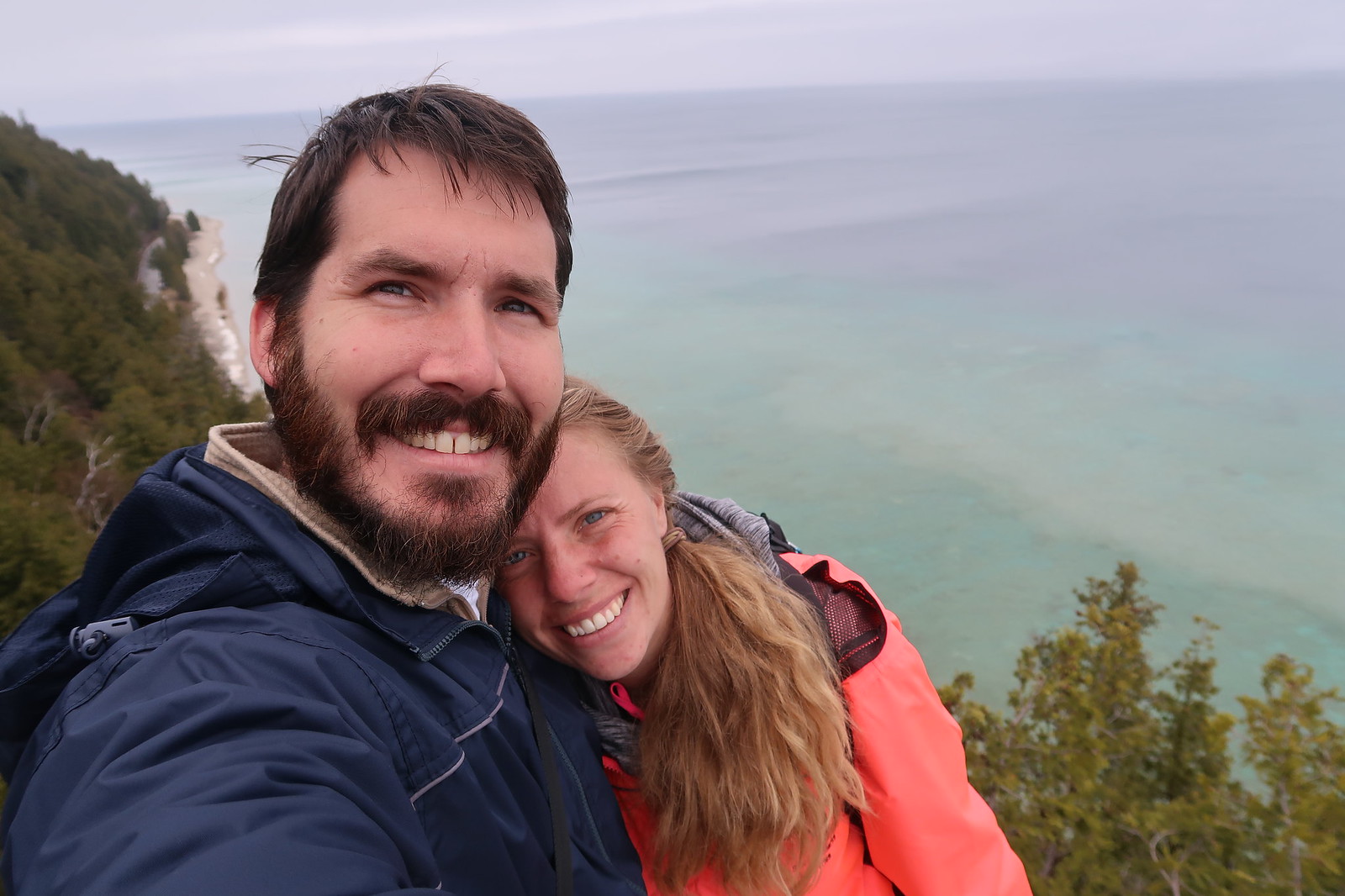 While this island is pretty small, there are quite a few hiking trails. It’s always good to verify we’re on track! 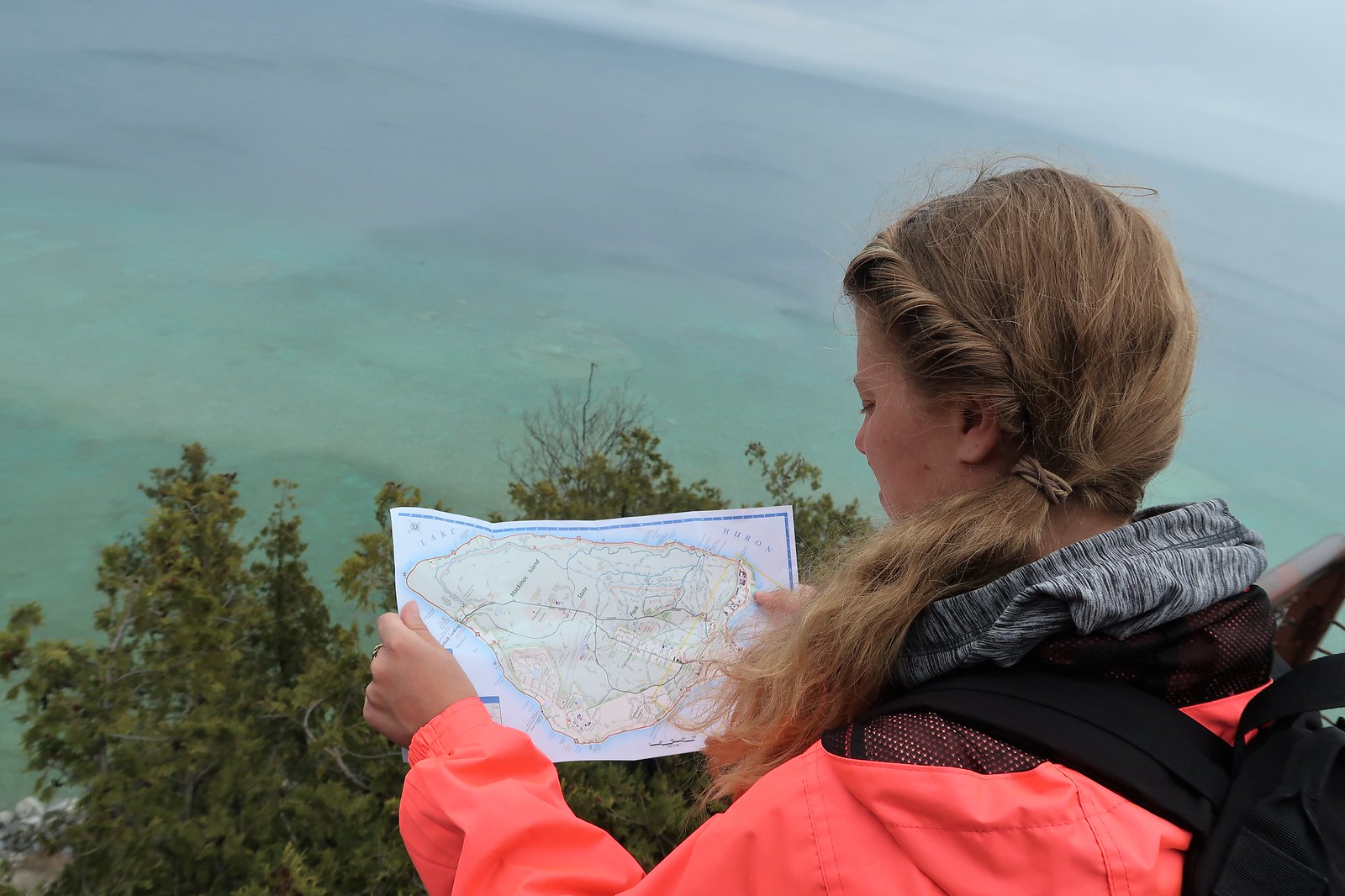 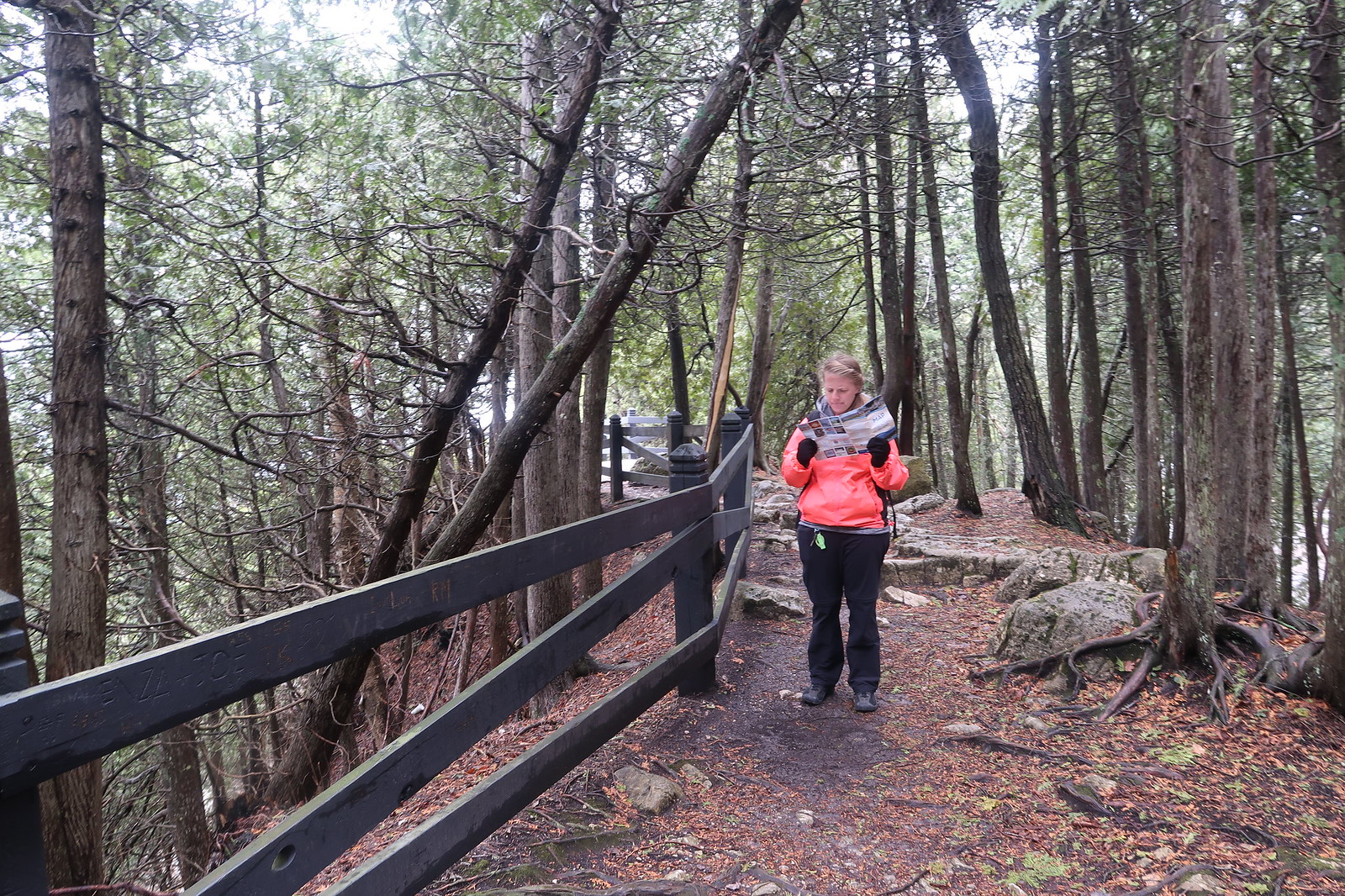 Hearing a name like “Skull Cave” we imagine some pretty spooky looking cave. …When we arrive and see this little slit in the rock wall, we’re a little disappointed. 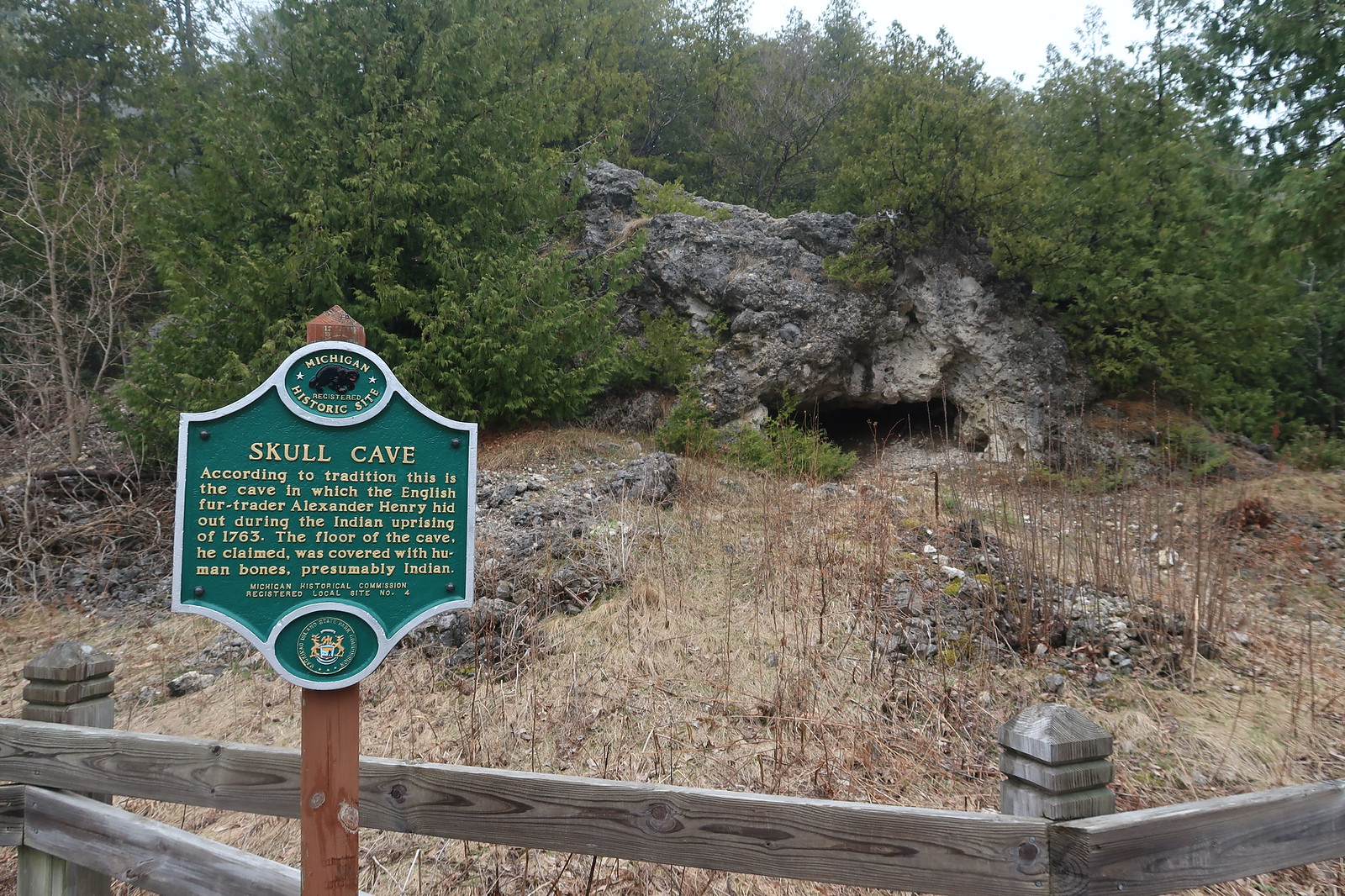 Are you wondering why this little hole is even called Skull Cave? Well, it’s believed to have been used as a burial ground for the island’s Native Americans.

It is said that at one point, a fur trader who escaped the capture of Fort Mackinac hid in this bone strewn cavern for a night. 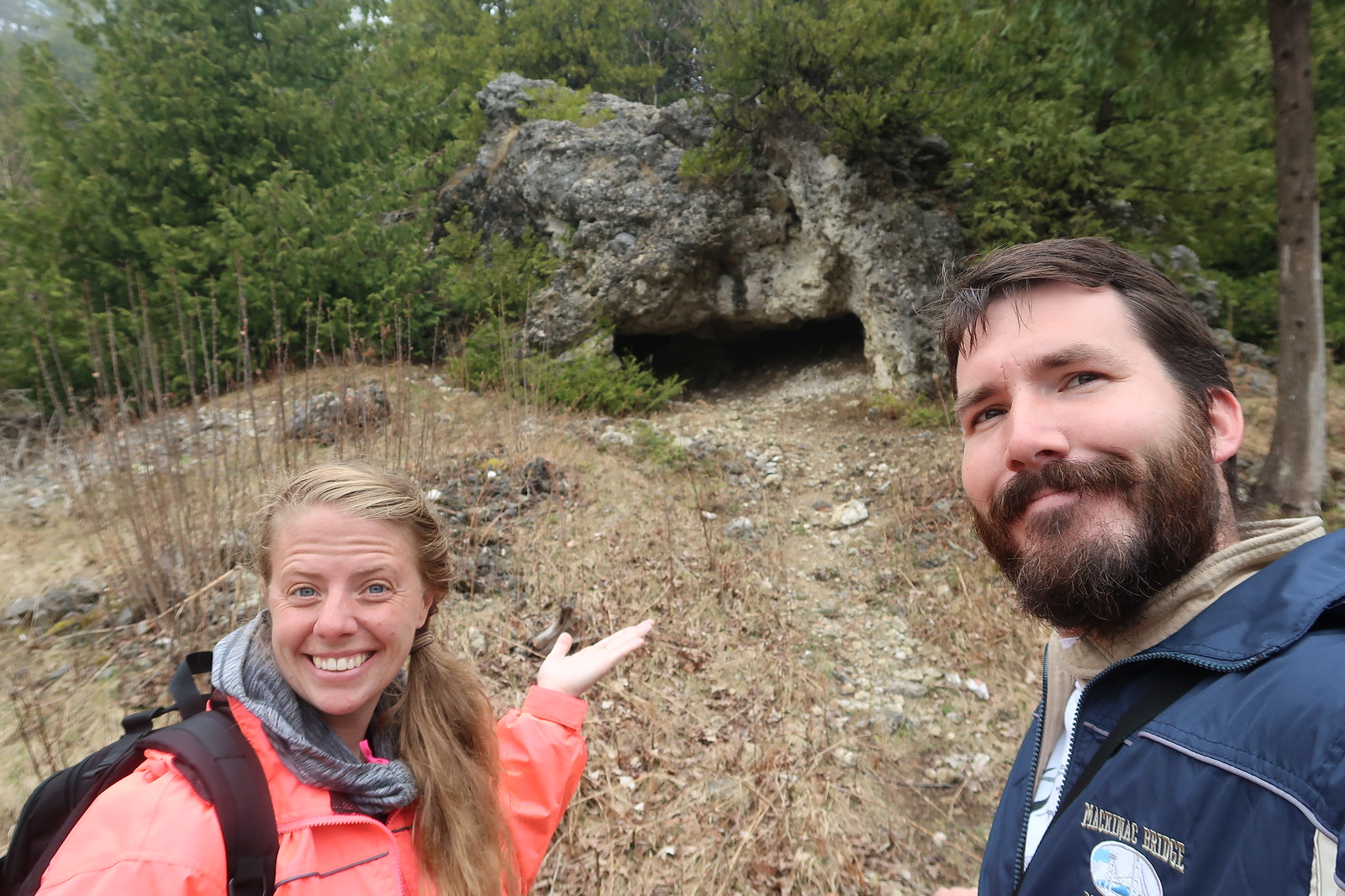 Making our way back to town, we see one of the only vehicles permitted on this island!!!

….. as well as this little stalker seagull. 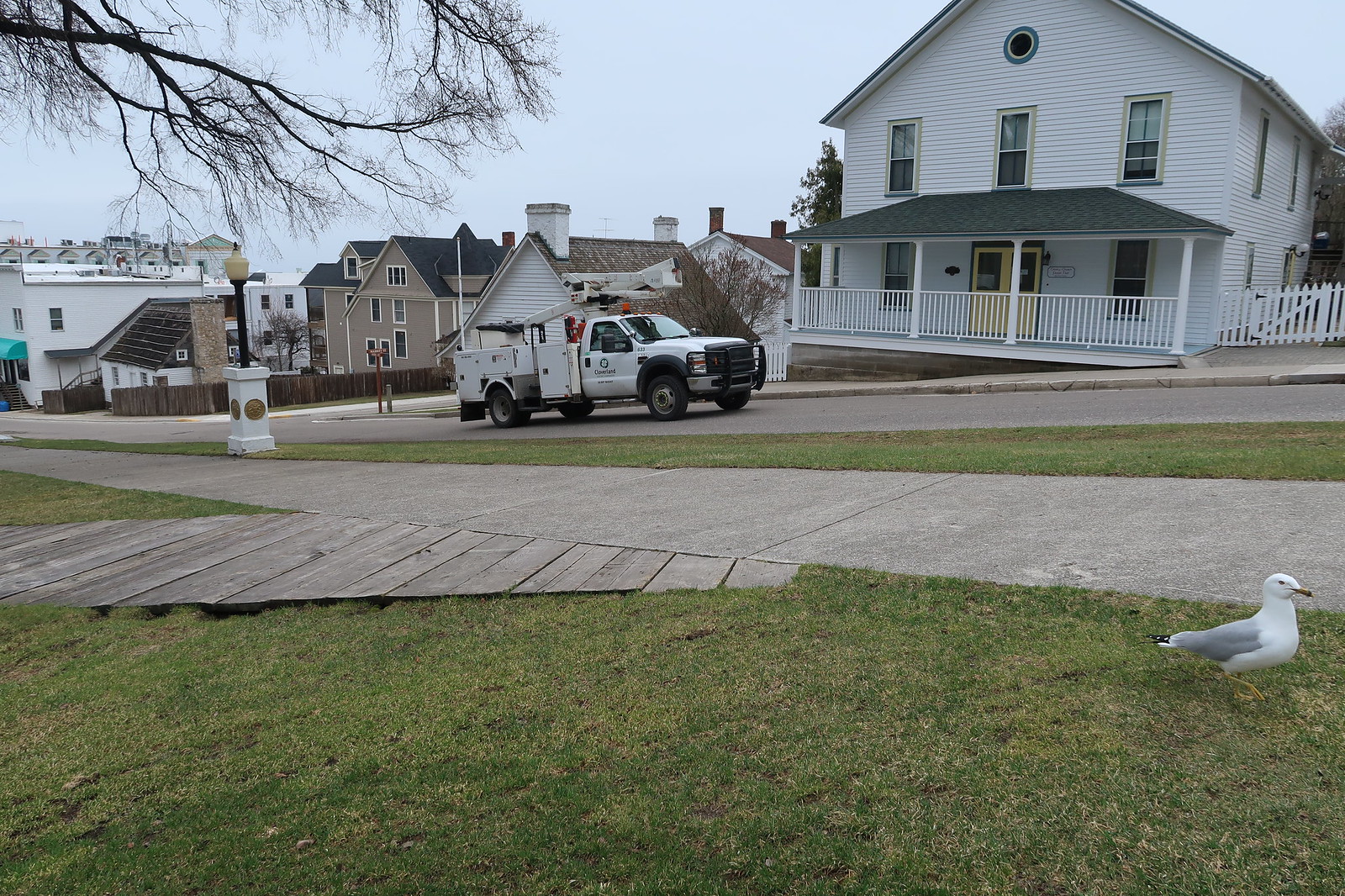 We were hoping to get the opportunity to tour Fort Mackinac, but we’re a day early for the seasonal opening.
If you want to read an interesting story of the fort, read this! Deady Lacrosse Game in Mackinac.

After grabbing a quick bite to eat, it’s time to hop back on the ferry toward the mainland. 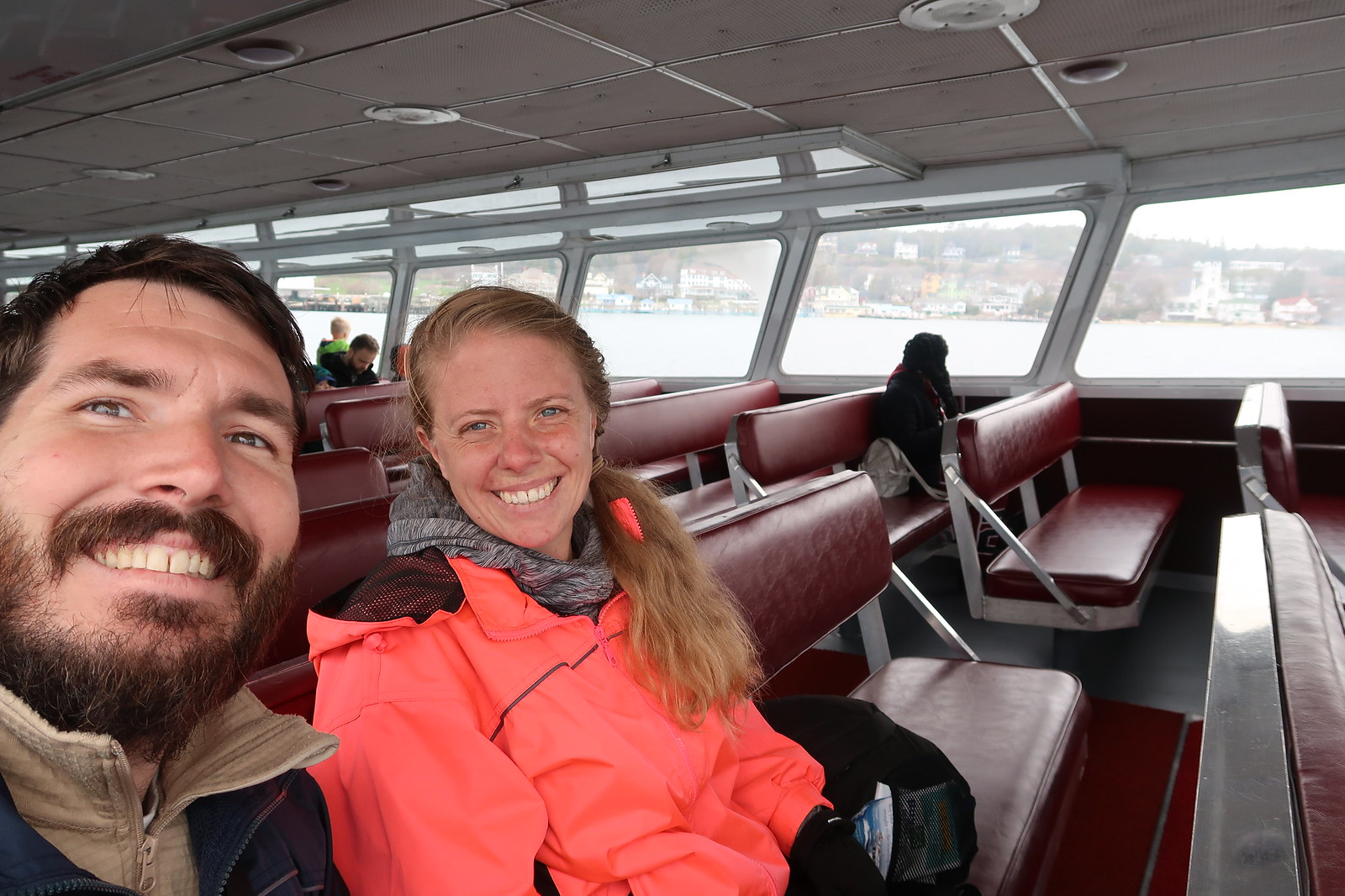 There’s just as much fog on the way back as coming out to the island. 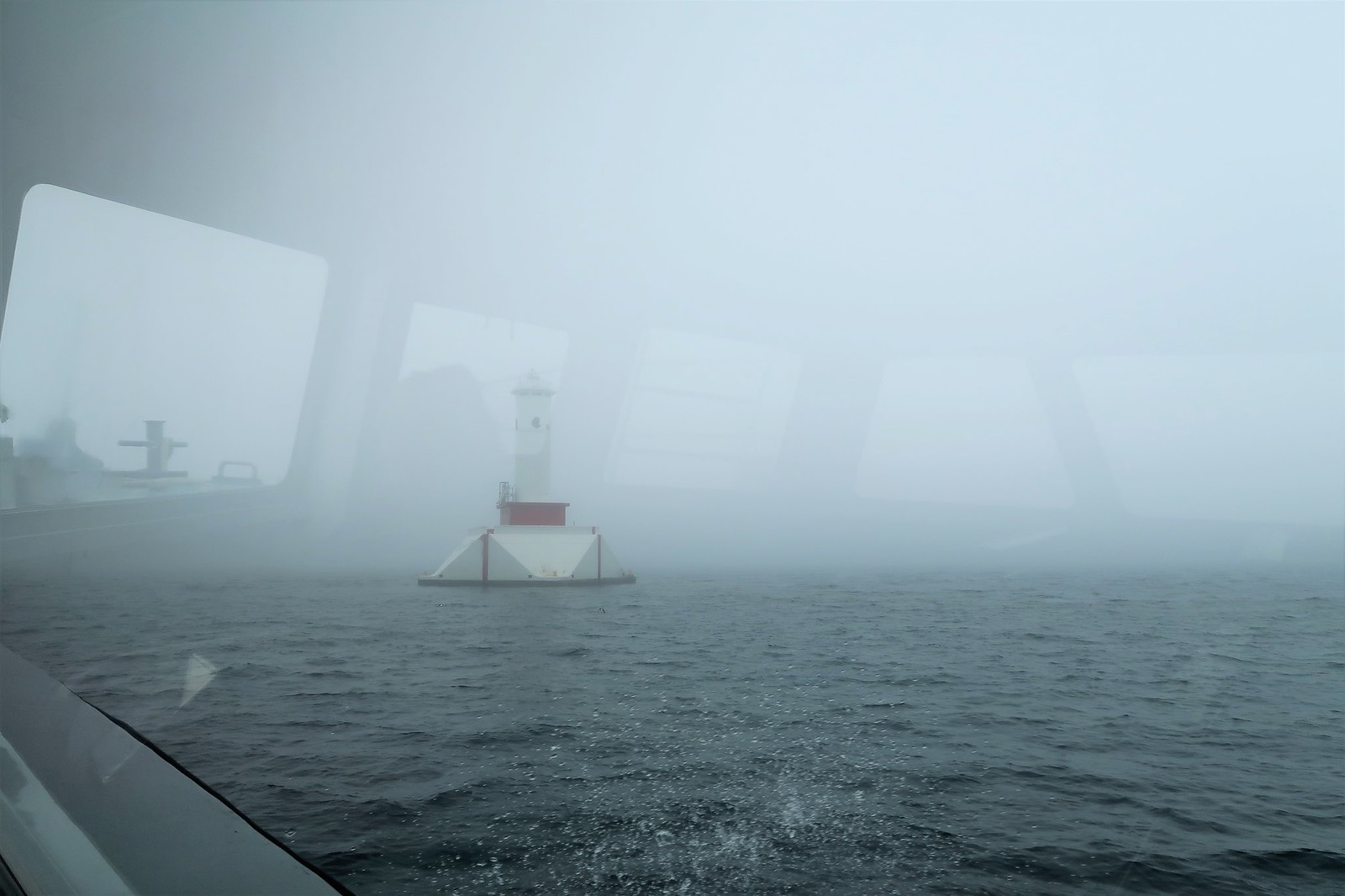 As we head out of Mackinac, we get the opportunity to cross the 26,372 ft Mackinac Bridge. It is the 19th longest main span and the longest suspension bridge between anchorages in the Western Hemisphere.

Fog adds an eerie effect to the bridge as we cross and continue our adventure. 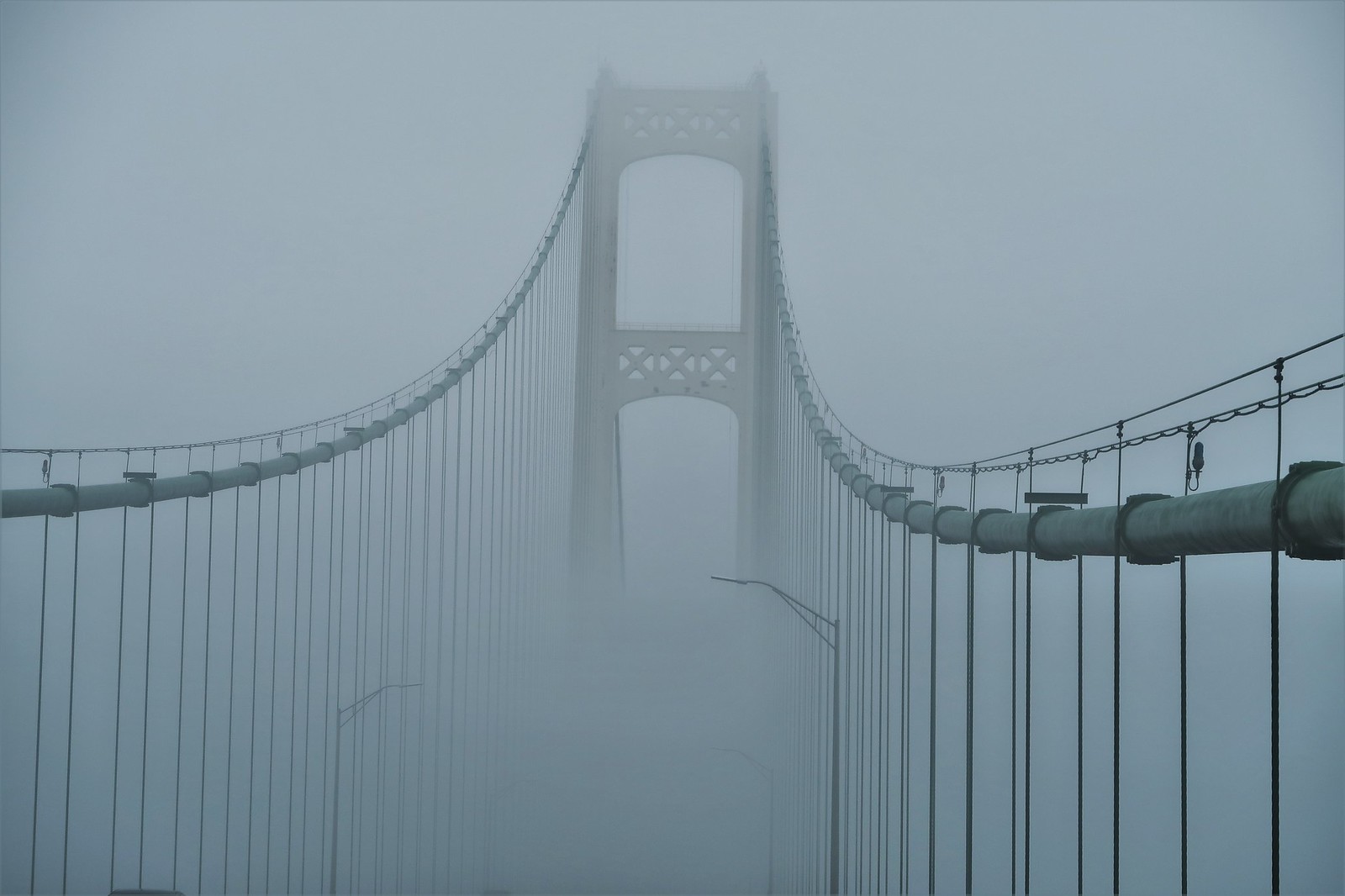