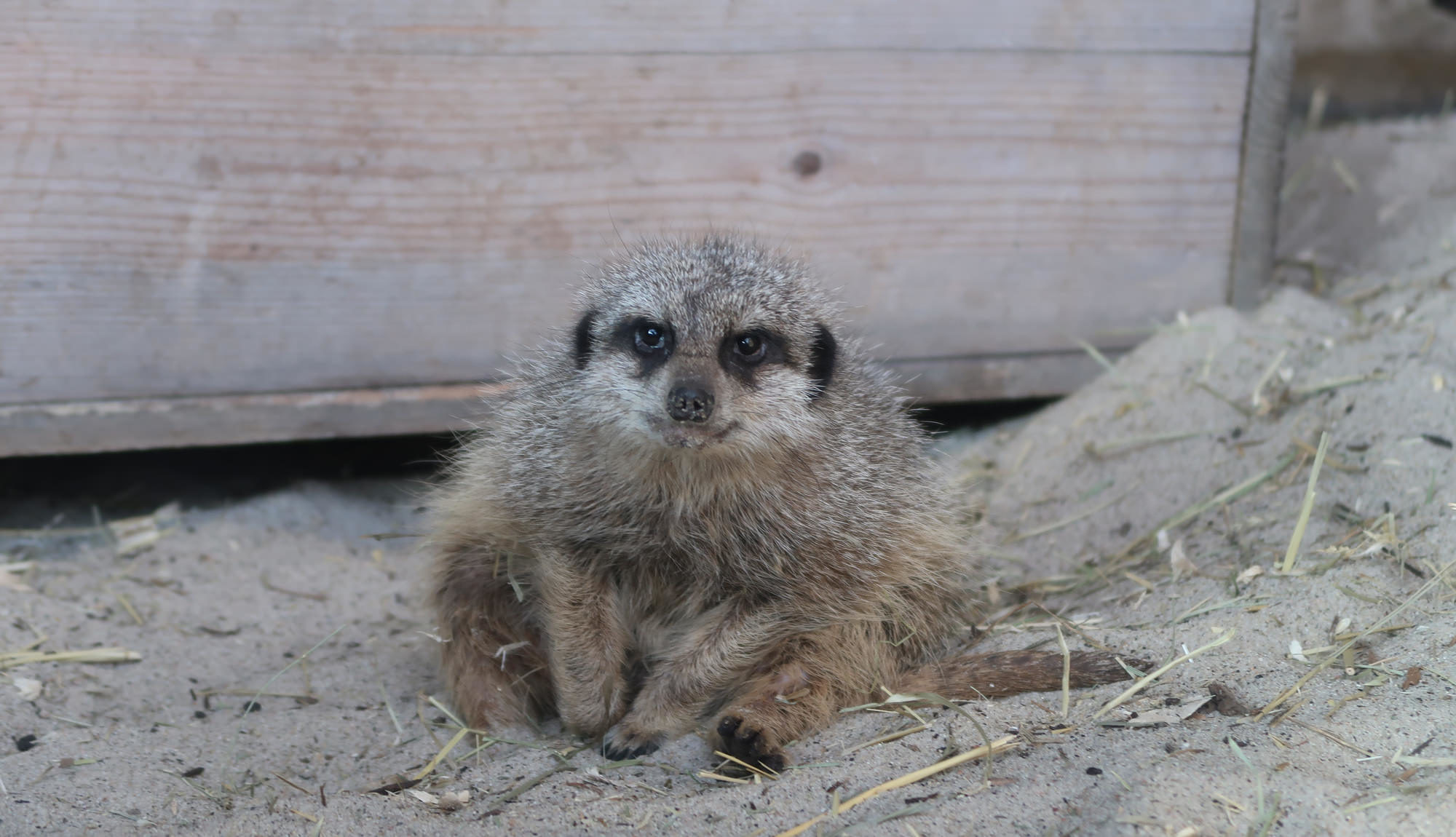 The chance to explore 130 acres filled with animals from across the globe is a pretty enticing!

As we approach the zoo, we can see the desert dome rising in the distance like the top scoop of icecream with a cherry on top.

Before entering the park we have to prepare ourselves for cuteness overload!!

While various portions of the zoo are closed for the season, there are very obvious perks to visiting the park during the offseason.

If this is like any other zoo we have visited in the past, these sidewalks are typically crowded with families and strollers cruising through the park.

The first animal exhibit we encounter happens to be the Meerkats.

We immediately fall in love with their captivating personalities. 💕

After our giggles at the meerkats we decide it’s time to move on. We take the loop recommended to us at the ticket counter and head to the Giraffes.

Once inside the Herd Rooms we are told by one of the zoo staff that there is a baby giraffe born this last November.

Although, watching the other giraffes, we can’t help but wonder what is going on.

This one is playing with her food…..

this one seems to want to smile for the camera….

and this one is pursing her lips curiously….

Still, they are all very entertaining to watch….. Plus, it’s nice and warm in here!

Entering the elephant quarters we try to attempt our best elephant impressions.

Upon entering their quarters we see what looks to be the mothers getting some yummy hay as the children play in the back.  🐘  🐘  🐘  🐘  🐘

They are pretty far back from the viewing point, but due to their large size we’re able to still joyfully watch from a distance.

Even with their food has been placed high, they stretch their trunks to the feeding nets provided.

You know the expression, so hungry you could eat an elephant????

They are somehow even cuter than before!!!

Did I mention how infatuated with them we’ve become??

We pry ourselves away knowing there are plenty more animals to see in this large zoo.

The warmth of the indoor exhibits is very enjoyable during the month of February.

Gazing upon the exotic insects that lie beyond the glass, we have a scare with an escaped prisoner.

Ya, this guy is on the outside of the glass. Sneaky little feller.

How would you like to find this guy in your shoe?

Whatever these are, we’re glad we haven’t come across them beyond the glass.

Looking at these guys through the glass is actually pretty cool.

For some reason they put a small group of birds in the middle of the insect exhibit. Maybe it’s to keep the insects in check and keep them in their glass.

Ahhhh…. another game of how close we can get!!!!

The camera gets in close…

…. but not us before he flys away.

This cute little guy is posing pretty nicely for us.

Cocoons! That is a lot of future butterflies!

Finally, out of the nastier insects into the beautiful lepidoptera/butterfly house.

Zoo staff forms the fruit in this beautiful formation… even though the butterflies and birds probably don’t care.

We are able to catch a shot of this hummingbird coming in to feed on the provided fruit!!

He is later joined by one of the moths inside this exhibit.

Sometimes he walks alongside him on the path!
Sometimes he secretly trails him in the bushes!

We’re so charmed with this little guy (named by the zoo as Dale), we spend a good part of our time playing with him!

What a great little guy 🙂 We’ll sure miss Dale.

Once inside, we see the puffin!

It is neat to be able to see them both on top and below the water line.

Next to the puffins is a bird that shares the same black and white coloration.

It is so fun to watch them glide underwater!

They like to come to the glass and watch the people walking by….

and are adorably photogenic!

As we watch this small waddle (what they call a group of penguins) we laugh at the fact that they look like a singing group on stage.

We’re constantly approached by these little guys, wanting a chance to make it on the blog!

In the viewing sphere we can reach up and touch them as they swim by (not actually touch).

We can’t feel their feathers through the glass, but we can imagine what they would feel like.

There is more to the aquarium than penguins!

Awe!!! Look at this little feller swimmin’ round!!!

Entering the large walk through aquarium, we can’t help but bask in it’s beauty!

All these fish  do is constantly swim in the same circle throughout the tank.

The fish in these these tanks are huge!!!

Jelly on your toast?

Exiting the tunnel we reach the majestic jellyfish!

The way they glow in their tanks makes them glow with perfection.

This is one bright eel!!!

The Desert Dome is the largest indoor desert in the world, so we’re excited to see what it has to offer.

Finally, we come across this little guy!

Standing there frozen in his pose, we wonder if he is even still alive….

Keeping on path, we find some hogs…

Kingdom of the Night

We are not really even sure what kind of animals this would include…. bats????

Cute little frogs on the glass.

When we first find this deep hole in the ground filled with water, we’re sure it’s covered with glass…. It’s not!

As we approach further, we almost fall in!!

It’s a deep one!
Wide open for any passerby not paying attention to fall into. Yikes!!!

We are curious how many people do walk in to it….  😬

Alligators and crocodiles!!!!! There’s a few beavers down here as well…. but not in the same pen.

Ya, we know, our animal imitations are awesome! 😜

The zoo worker calls this orangutan to the glass to say hi.

We take advantage of his response to her to snag a few closeups.

He gives us a pose before we head on.

For some reason they’re feeding these guys cardboard…. and they seem to love it!

It looks as though this guy and Kali are having a conversation.

As we are about to leave the large monkey exhibits, there is this little guy tucked in the corner.

He is soooo entertaining to watch scurry, climb , and glide around his cage.

It’s actually quite difficult to snag a picture of him in between his rapid movements.

Back outside we come across this solo tiger pacing the top of his cage.  🐯

Our last indoor exhibit is the Lied Jungle. Most of it is closed for renovations, but we were able to walk around the top boardwalk.

There is a small batcave tucked away in one of the corners.

A beautiful waterfall flows down the walls of the boardwalk.

The path follows behind the falls, making for a romantic viewpoint.

How did we end up back at the meerkats????

We could not leave without saying goodbye to our new friends!

It’s time for us to wrap up our time at the zoo and depart these fascinating creatures.

Thanks for hanging in on this long post!!
Until next time!