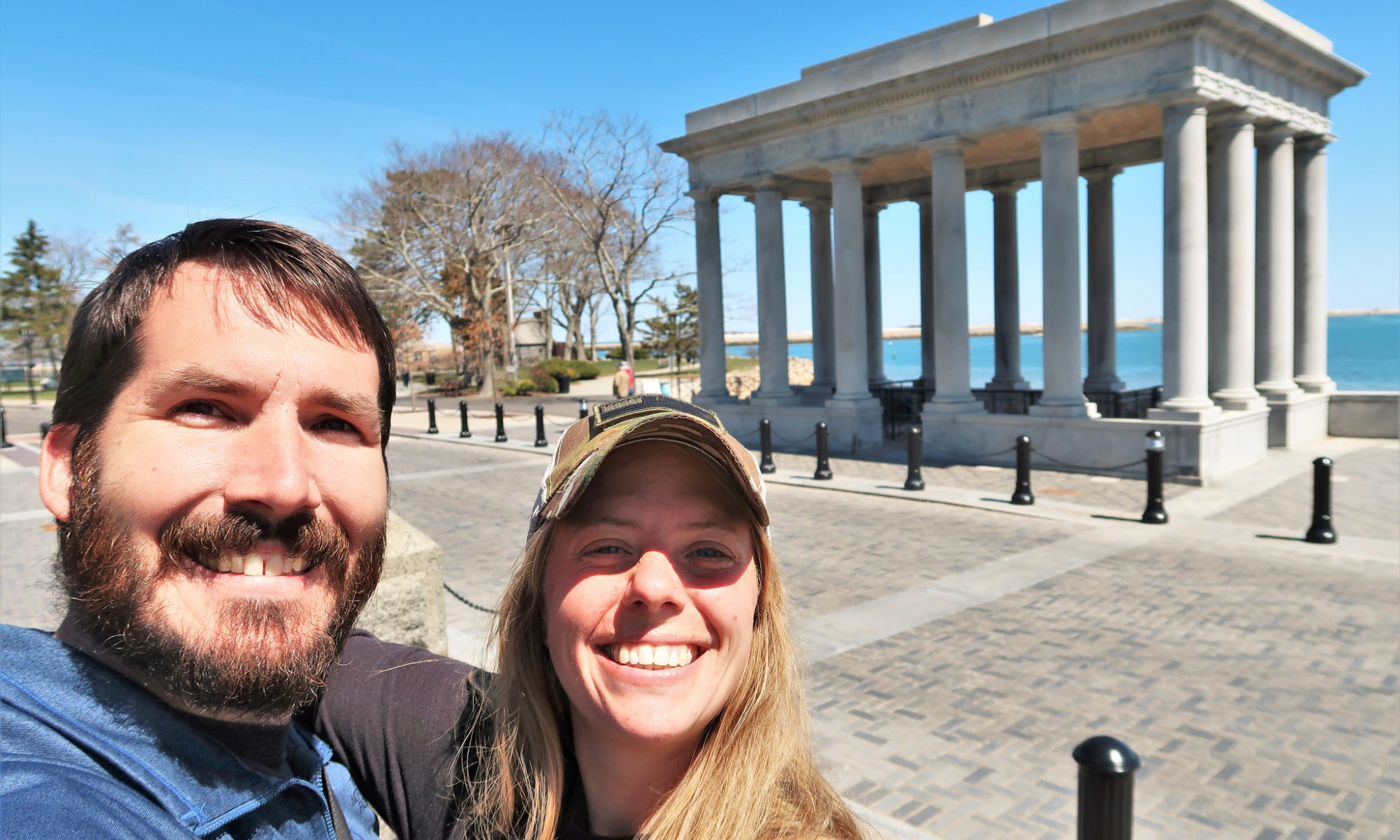 An evening in Boston, followed by a day in Plymouth!

We’re not really sure what to expect in Plymouth, other than…. well, a rock!

Sometimes timing works in our favor!
As we’re travelling through Boston, one of Kali’s old friends is performing at a local coffee shop for a singer songwriter night.

Along with her boyfriend, they perform some of her work. We really enjoy hearing her creativity and talent.

Our visit is short, but well worth it to see an old friend. We’ll have to visit longer some other time!

We arrive at Plymouth Rock, pay the meter for a quick 20 minute walk to view the rock marking the Pilgrims landing.

It’s not much to see, but still pretty interesting.

A ranger nearby explains the rock used to be 3 times the size it is now and according to journal entries served as an anchor to tie off ships.

They have to place it in this protective covering, away from reach, to protect it from people wanting to chip away this important piece of history.

After viewing the rock, we still have about 10 minutes left on the meter. We decide to take advantage of the time and wander the area.

Walking around led us to a boardwalk where we meet Bill.
In talking with Bill, we learn it is here that the Mayflower II is normally docked. It’s always really fun to see how all the things we see connect to each other. We remember seeing the Mayflower II at the Mystic Seaport!

Bill also provides some history of the area and recommends a walking loop to get a glimpse of some of the interesting things in the area!

He makes it sound so interesting, we head back to the van, add some more time on the meter and head out on the path!

The first stop brings us by this old church and leads us to….

Just a short walk up the hill, we arrive within minutes.

Burial Hill is also known as Fort hill and at 130 ft, this is the highest point in the area. Great place to build a fort!

This cemetery is the burial ground for the first pilgrims.

Similar to Jamestown, the Pilgrims did not want the local Native Americans seeing how many people they bury, so they would hide the numbers by burying at night.

Two competing claims place the burial site for the Mayflower passengers either here (Burial Hill), or on Cole’s Hill.

Atop Burial Hill is lovely view of below.

His headstone is said to be the oldest one on Burial Hill.

Here lies the grave of the Sailors from the ship Brigantine General Arnold.
The crew of 105 was stuck less than a mile off shore near Plymouth. Unable to navigate to shore, only 35 survived after a harrowing 2 days in bad weather.
Nine of the men died shortly after reaching shore.

While the captain, Captain Magee survived the whole ordeal, he requested to be buried with his lost crew once he passed away three years later.

The large tomb behind us belongs to William Bradford, one of the original settlers on the Mayflower.

After barely surviving the first Winter, Bradford became the second governor of Plymouth.

Exploring around, we learn It just happens to be the time the Herring are spawning!

As we walk past the Grist Mill,

we find a lovely path to view the fish spawning up river.

Behind the mill is a fish ladder

If you look closely at this stream, you can see the bountiful amount of herring trying to make it up.

Here’s a closer look…. There’s quite a bit!

sitting patiently and peering into the base of the fish ladder, we catch a glimpse of them jumping up.

If you look at the base, you can see a little fishy flopping up to the next rung.

We find it quite amusing watching these little guys power through the current.

Some slide gracefully up the current, while others flop up to the next level.

After waiting patiently, Tommy is able to get a shot of one of the fishes jump up to the next level.

It’s quite the spectacle!

We watch for quite some time, then head further down the path.

After walking the nice path, we make our way to Leyden St.

We’re not sure how this memorial stone can be placed, seeing how it’s not 2020 yet….

Atop Cole’s Hill, we can see the Plymouth Rock monument as well as the wonderful view accompanying it.

There is also a monument to commemorate Massasoit, the chief of the Wampanoag Indians.

Nearby, we spot a nice little bench to take in the view.

It is nice to sit and discuss all that we’ve learned walking through these historic grounds.

Shortly after leaving the bench, we see it’s a popular activity spot for couples. 👫

We pass the memorial for all of the 104 passengers that were aboard the Mayflower and buried within the first year of arrival.

You can’t go to New England and not get CLAM CHOWDER.

At a small joint on the pier, we stop and pick up a nice cup of the delicious soup.

On our walk, we notice the artistic lobsters along the path.

This one was Kali’s favorite!

Throughout our travels, we’ve seen several cities with sculptures similar to these, but different animals.

It just looks so neat seeing these art pieces with the pier and crisp water in the background.

The origin of these if a Lobster Crawl event in 2016.

In total, there are 29 of these fiberglass statues, hand painted by local artists.

We’re giving a huge THANKS! to Bill for making our trip to Plymouth more than just viewing a rock.
Walking around city and viewing just a small piece of Plymouth was a very nice adventure for us both.

Also, FYI, Bill mentioned that when the Mayflower II is complete (hopefully by 2020), they will be sailing it down the bay. He mentioned that there is a lottery to give people an opportunity to ride on the voyage!

We’ll have to keep our eye out for that!