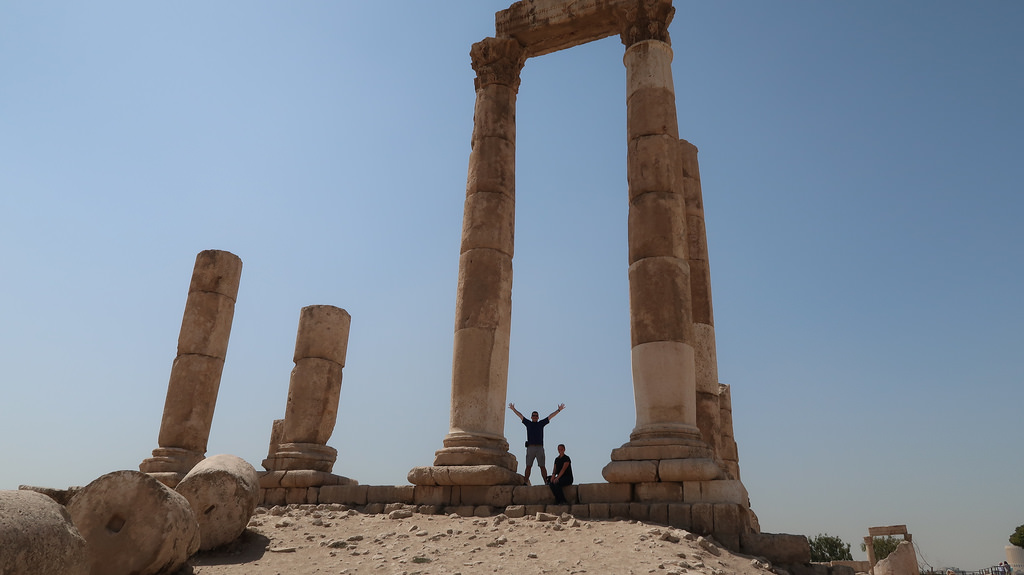 Well here we are in Jordan!

We couldn’t be grateful enough to have this opportunity and explore this region of the world.

There’s so much history here, spanning all the way back to the beginning of time!

We’ll definitely try to escape work at every chance to explore as much as possible.

We’ll be trying to explore three sites today, so it’ll be a packed adventure!

First, a big thanks to Andrea Bocelli (yes the opera singer) for personally denying  us entry into Jerash!
Okay, we kid… but at the same time…

While driving up to the site we don’t exactly see Mr. Bocelli standing at the gate, refusing us entry on this once-in-a-lifetime visit to the ancient Greco-Roman city.
Instead, we see armed Jordanian guards closing the site in preparation for an opera Mr. Bocelli is scheduled to perform.

I’m sure it was a great opera… hopefully worth our disappointment.

But! We’ll make the best of it.
And the best we can do is drive around the outskirts, snapping photos!

Even from the outside, the place does look very interesting…

The security’s so tight around the site, we’re not even allowed to stop the vehicle, let alone get out to talk around…

Sometimes the fence is low enough that it escapes the camera frame.

In all seriousness though, it is cool to just be here.

Two human skulls have been found dating back to this era; making Jerash one of 12 sites in the world to contain such remains.

Most of the architecture comes from the Greco-Roman era.

Inscriptions in the site suggest the city may have been founded by Alexander the Great himself!

Jerash is significant because it contains some of the most well-preserved Roman architecture in the world, outside of Italy.

With the visit to Jerash so short, we easily make it to Ajlun Castle.

Ajlun is a 12th century Muslim castle, used primarily to defend against Crusader incursions from across the Jordan Valley.

Because of its defensive posture, Ajlun has breathtaking views of the Jordan Valley.

We really didn’t know what to expect coming here…

and the surprise is an experience of its own…

We take the time to look out over the Jordan valley…

and imagine all the history soaked into the land.

Moving around in the castle is easy.

Our last stop this trip is the Amman Citadel!

Like Jerash, The Citadel has a long history of being inhabited by many different civilizations from the Roman, Byzantine, and Umayyad periods, and includes pottery dating all the way back to the Neolithic period.

The site is still under construction as the government works to restore many of its historic sites.

These plaques illustrate the history of Amman, each one representing the same city but under the name as it was known for that era.

Even with our unfortunate ignorance to world history and culture (we’re working on it 🙂), it’s a wonderful experience to visit these sites; knowing nothing about them, then to leave, learning all the significance of what we’re seeing.

The most obvious structure is the tall set of columns behind us.

This is believed to be the remains of a Roman Temple of Hercules dating back to 661-750 AD.

The size is simply amazing.

The back side of the temple contains a feature, we unfortunately didn’t notice until after we had left.

We only (accidentally) took one picture of it.
Seen below, to the very right, is a tiny little fist statue…

Well, it’s not actually that small of a fist…

And thanks to the internet, we can simply look it up:

Experts’ best guess is that this is the remains of a statue of Hercules.

It’s estimated by the fist’s size that, in its original state, the statue would have measured 43 feet high.

Quite an amazing fact!

Further into the site we discover the Umayyad Palace.

The domed building is known as the “Kiosk” or “Monumental Gateway” and may have served as a mosque.

Passing through provides entrance to grounds beyond…

which lay mostly in ruins…

The colonnaded road connected the structures.

Many areas of the site remain largely unexcavated… and who knows what we’ll one day find.

Today, the Amman Citadel grounds are completely surrounded by the hustle and bustle of modern Amman.

Check out our gallery of pictures from Ajlun Castle, The Citadel, and Jerash.