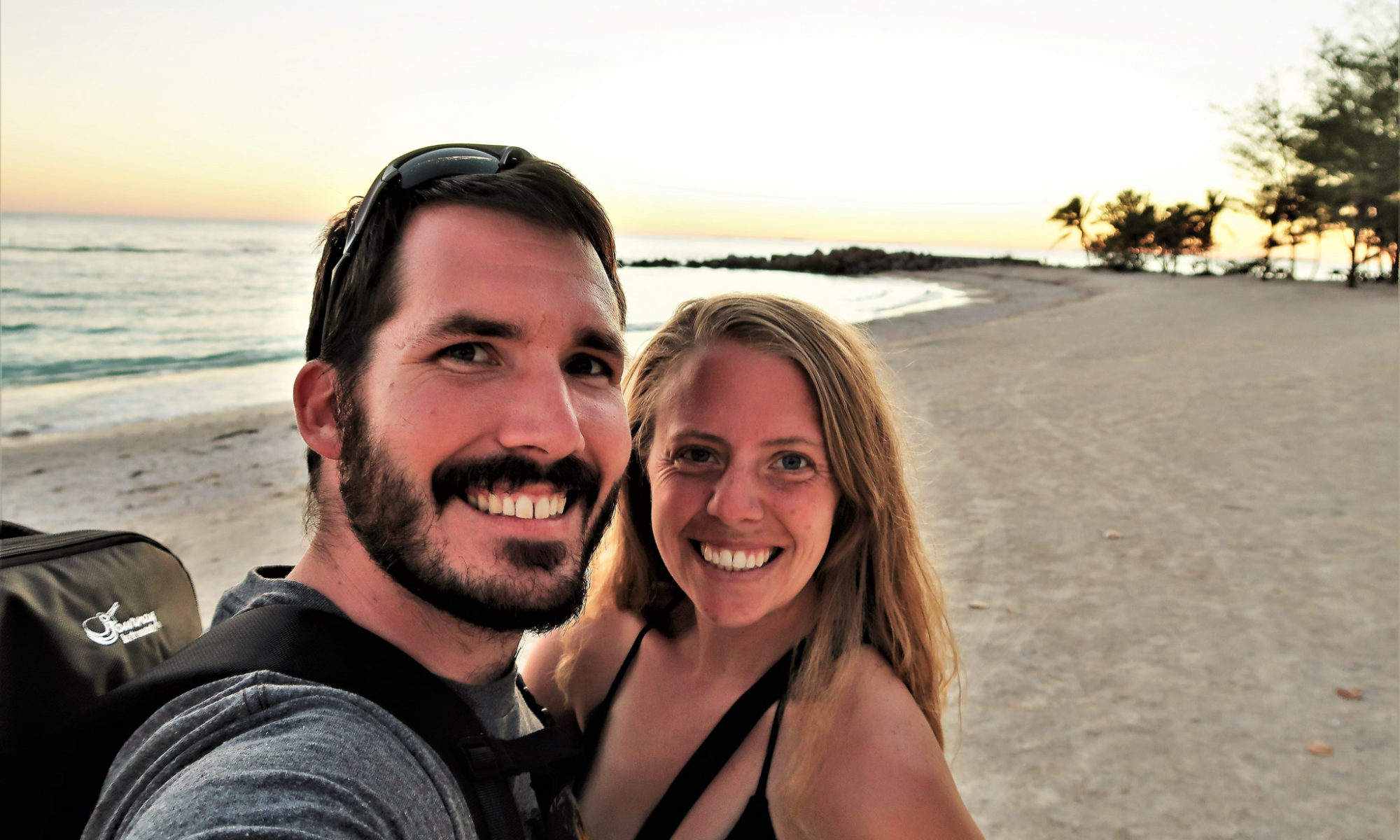 What’s an all-American road trip without traveling to the southernmost city in the USA, Key West!!

There isn’t much on our agenda other than eating key lime pie and visiting the lowest point in the US. This should be a nice relaxing day!

We park the van as close to the beach as possible. This beach is where we plan to go swimming this afternoon after walking around.

Tommy glares back as Kali impatiently rushes him to get his sunscreen on.

Suddenly tables turn and Tommy is stuck waiting for Kali!!

We’re both finally ready to head for our walk around Key West.

This stop was recommended by Kali’s grandma, so we go inside for a look.

Most of the rooms inside are empty of furniture, but have informational placards and pictures of Ernest Hemingway throughout his life.

This house is also home to a large number of cats. Fifty Four to be exact! 🐱🐱🐱🐱🐱🐱

The kitties have the luxury of wandering and lounging around the property as they wish.

We get the opportunity to pet them as they sleep!

Scoops decides it looks pretty comfortable, so he squeezes himself into the sleeping cat’s paws.

The cats on this property are unique, due to the fact that they are all polydactyly (six-toed cats).

Many of them are descendents of Ernest’s cat he owned while living there.

As we walk further around the house, we see more of the bedroom and offices that Hemingway once used.

On the second floor is a balcony with stairs leading to the garden.

The garden is very well maintained.

They have tons of little cat houses throughout the gardens, which the cats take advantage of for afternoon naps.

Even in the ground…

We come across the cemetery for all the lost cats throughout the years.

It’s said Hemingway threw this very penny into the cement exclaiming that this house was taking up all his expenses…. down to the last penny!

After cruising around the house for a bit, it’s time to move on and see what else Key West has to offer!

Right outside of Hemingway’s house across the street is a lighthouse.

The Key West Lighthouse began operation in 1848, guiding ships through the dangerous reefs lurking around the island. It was decommissioned in 1969 and converted into a museum.

While the history of the lighthouse seems very interesting, we’re just going to stick with this view from the outside.

In Key West, everything’s claim to fame is to be the southernmost *blank*.
While cruising around, we find this church.

We don’t see any other Prayer and Faith Center Churches more southern than this… so maybe it’s so.

It’s the end of the road!

As we pass the the Mile Marker 0 for US1, we cannot resist snapping a photo (there’s actually a line for photos).

Interstate US1 connects most major cities in the eastern U.S., so it’s no wonder this spot is so popular for photos.

Just across the street (headed the opposite way) It’s the beginning of the road!
The start of of US1…. what a coincidence!

Walking around, we begin to feel our tummies rumble. It’s time to look for food.

How could you be so close to the ocean and not get seafood?

Fisherman’s Cafe is where we’ll eat. This little seafood joint is right on the wharf.

Tommy orders a fish burger and Kali, the fish tacos.
Both are delicious!

While we wait for our food, we take a look at some of the shops close by.

Finding a nice bench to overlook the water and enjoy our scrumptious food.

Naturally in Key West, you must have Key Lime Pie!!

Inside there is also some taste testing for their sauces….

After picking our dessert, we head out to the garden and enjoy it.

We also order Key Lime Pie on a stick, frozen, and dipped in chocolate!!!

Tommy is pretty excited to taste what Alton Brown rates as one of the Top 10 Sweets in America.

Tommy takes a moment to savor the taste and decide for himself….

We switch desserts, so we can each try both of them.

Maybe just sneak it away???

Even the coy fish are wanting some!!

With our dessert finished, its time to walk it off.

And Time for a drink!

Walking past this seaside bar, we can not advance any further without enjoying a tropical drink!

It even comes in this adorable souvenir monkey cup!

Scoops can’t help himself to some!

What a gorgeous day…

We see several cruise ships docked here as well. Our last cruise was such a blast; It’s quite tempting to hop aboard and follow the sails wherever they may go.

But… our road trip is our priority, so we’ll stay on land.

While walking through Mallory Square we happen to stumble upon this shop where EVERYTHING is $5.

Purchasing so many new outfits, its already time to try one out.

We pass the “Embracing Peace” statue, which is a 25 ft, 15,000 lb sculpture depicting the famous “Unconditional Surrender” photo.

Did we mention that there are chickens roaming free all throughout Key West? 🐔

There has been some controversy between the locals on whether or not to let them remain running free or to remove them.

Even though we already had Key Lime Pie, we decide we need double dessert today…. so we get some ice cream!

This stuff is made daily, right here!

Finding ourselves back at the Mile Marker 0, we pose for another photo!

The Kapok Tree is a sacred symbol in Mayan mythology. It is also known as the Java cotton.

Fiber from this tree was once used in life jackets due to its water resistance and natural buoyancy.

Our excursion takes us back by the lighthouse once more….

There’s quite a line to take a photo with this iconic monument. We avoid the line and take one from the distance….

The southernmost point is actually located on the Naval Station near the monument. The monument marks the furthest civilians can go.

We’re not just ordinary civilians, so we decide to hop on base to see if we can reach the true southernmost point.

After getting on base, we walk to the real southernmost point and find it is blocked by a fence surrounding some dishes, off limits to unauthorized personnel.

It’s now time for us to head back to the beach to relax and enjoy the sunset.

This beach area is looking to be an ideal spot for the sunset!

We head back to the van to get changed into our swimsuits….

… Then head back toward the beach!

The water is pretty chilly, so we only wade out to our hips.

Almost immediately when we arrive, the sun begins to quickly go  down.

Ralph and Scoops have found a nice leaf to lay on to enjoy the sunset as well.

We take this opportunity to pull out the guitar and play some tunes.

It’s a perfect activity to partake in as the sunset surrounds us!

We enjoy our time spent together here, finally getting to relax on a beach.

Almost immediately after the sun has disappears beyond the horizon, men on gators come through and kick everyone out of the park.

We pack our gear and take one last picture.