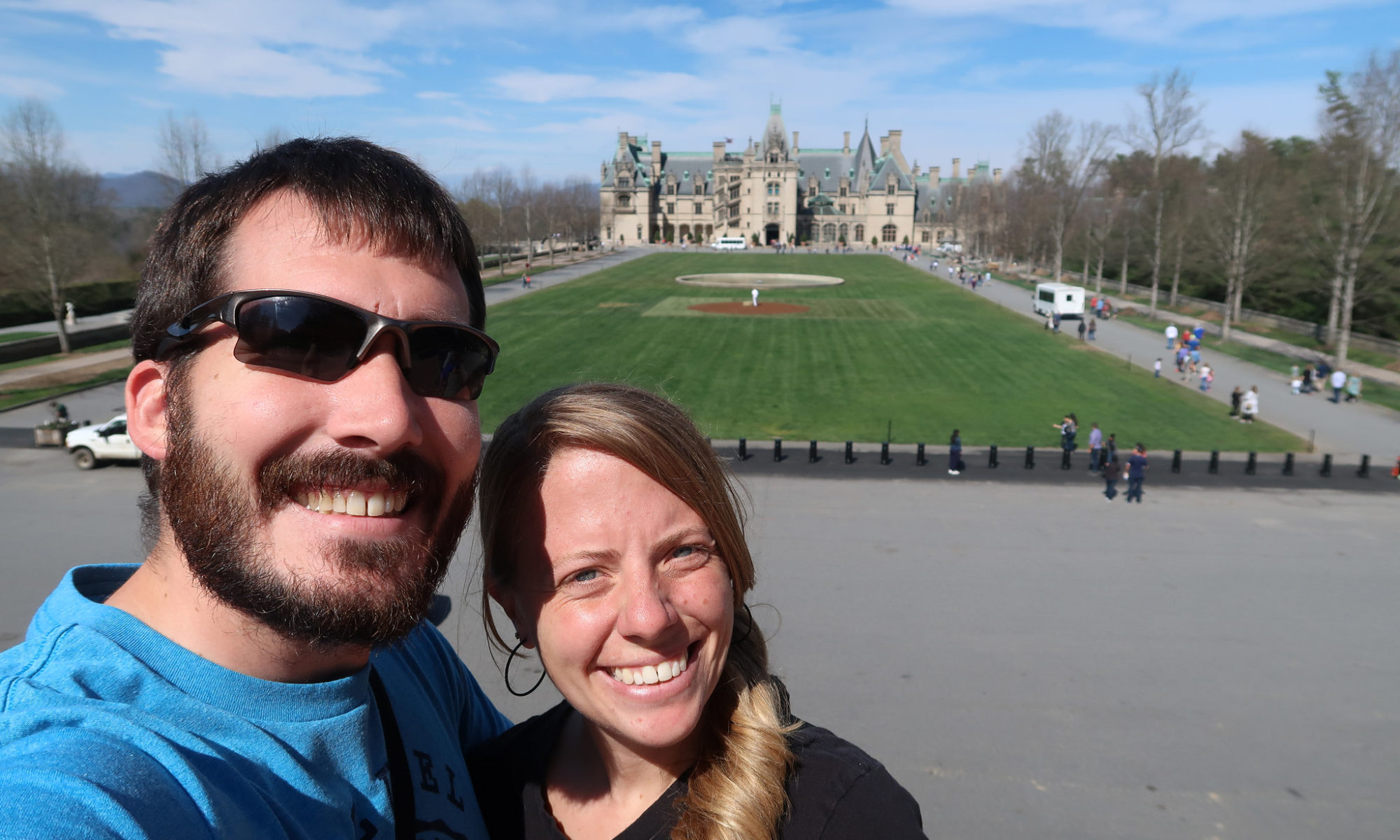 Today we’re cruising through North Carolina and making a stop at Biltmore, the largest privately owned house in the United States.

A huge thanks to Daniel and his family for sharing their home, despite being in the middle of  a move! Daniel makes the best home cooked BBQ we’ve had! Thanks for letting us stay with y’all! And thanks for talking us into going on that run 😛 We need it!

If you ever make a trip out to Washington, let us know!! We’ll be happy to have you.

Leaving Daniel’s we head to our next stop, and the primary subject of this post!

After purchasing our tickets and parking the van, it is finally time to head toward the Biltmore House!

As we walk toward the house, we are met with the beautiful splendor of the front lawn.

The Biltmore Estate is designed to entertain!

Based on the ticker’s recommendation, we purchase the audio tour handset!

In the 1800’s, it’s common for wealthy households feature gardens inside their home.

This indoor garden is spectacular!!

It just so happens that the time we are visiting the estate is the time they are showing off the fashion from the era of the Titanic.

This is also the same kind of fashion the Vanderbilts would have used during this time.

Walking through the rooms of the house, we’re surrounded with people attending the tour with us.

Fighting our way toward the front we’re able to get views of each room and the Titanic fashion displays within them.

In their main dining hall is a church sized organ!
While this isn’t the original organ, it is still quite a spectacle to see.

It’s said that Mr. Vanderbilt donated the original organ to All Souls Church in Biltmore Village.

While the house is beautiful to tour and see, the crowds make it almost unbearable as we go through each room.

At least the ceilings are less crowded… and offer a view of relief!

Do you see the “secret” door to the right of the fireplace?
This door is for servants to deliver food.

There is also more Titanic fashion.

A Room For Everything?

This room, as well as the music room, did not complete construction until after Mr. Vanderbilt’s time. Today this room is a ladies sitting area…. fancy!!

You can see the crowds we’re having to deal with though…. The entire house it like one big line!! 😐

With the rooms unfinished, Mr. Vanderbilt still used them for preserving some of our nation’s precious treasures during WW2.

It now serves to preserve the treasures of musical art!

Out on the Loggia, we can see the views of the estate.

The Blue Mountains in the distance….

The Library is one of George Vanderbilt’s favorite rooms, and boasts a book collection of about 24,000 volumes!

The astute observer can tell that George Vanderbilt was a huge fan of the arts.
In his library is a ceiling painting by Pelligrini titled “The Chariot of Aurora”.

This hallway (as the name might suggest) features large tapestries along the walls.

The first room we see on the second floor is for guests to meet and greet with each other… what luxury!

In the 1800’s, traveling was much more difficult, which makes visiting old friends and relatives more special!

Here’s a family portrait of the Vanderbilt family.

We finally catch a glimpse into Mr. Vanderbilt’s room.
The bed may look small, but it’s only because the room’s so large.

Ah… all the comforts you could imagine!

As if one living room isn’t enough…

Between George and Edith Vanderbilt’s room is a sitting area, commonly use as a private living room.

Included in this room are more portraits and artwork that Mr. Vanderbilt admired so much.

Mrs. V’s B
(Just keeping with the theme here)

Across the way is Edith Vanderbilt’s room. It’s a fairly common practice back then for the man and woman to sleep apart.

The separation isn’t to keep the husband and wife apart, but to keep the man’s servant from seeing the lady as she dresses.

Back Down The Stairs!

As we go down some stairs to the lower portion of the second floor, you can see how we have had to fight through the crowds.

It’s still one giant line moving through the entire house…

After finally getting down the stairs, we’re taken through some of the 37 guest rooms. Maybe it is good they have their own private living room…

It’s also the room that has the “Heart of the Ocean” necklace from the Titanic movie! oOoo… pretty!

After finishing the upper levels of the house, we’re taken into the basement.

…and even an indoor swimming pool!!

The lighting in this pool is all original.
Unfortunately, the last time filling it lead to the discovery of a leak! So, the possibility of ever filling it again is pretty slim.

The basement also features a “state of the art” gym… for that era anyway.

The showers on the right are “Needle Baths” and supposedly  increase blood flow, soothing tiring muscles.

Someone’s Got To Keep This Place Running!

Due to the superior treatment and pay, servants held a strong desire to work here. Multiple generations would serve them.

Even from the basement floors, are great views of the property surrounding the house.
Guess that makes it a partial basement?

Look! We can even see a horseback riding tour!

All the copper pots here are originals!

There is also the servants eating area on this level.

In case you didn’t recognize this, it’s Jack’s outfit when Rose goes down below to dance among his friends.

Flowers from the massive garden are brought to the house and used for decorations.

We can smell this room from all the way down the hall!!! 🙂 🌼

Seeing how this house is basically a hotel, it is no surprise that it needs  a laundry room.

It is amazing to look up the massive stairwell leading to the rest of the house.

Once back up the stairs, we get a second look at the dining room…

and explore the billiards room.

Lets go get some food!

Outside the house are several shops and restaurants.

Oh yeah… and one of them happens to serve ice cream….

The gardens surrounding this house are too large for us to explore… with 7,000 acres we don’t have to explain why.

We do however find a sweet greenhouse!

Once outside the greenhouse, it’s time to make our way back to the van.

Perhapes the estate is less crowded other times of the year.

Regardless, the property is neat to see and the free tastings round off the day perfectly.